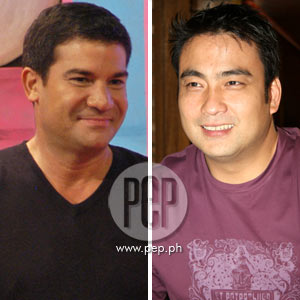 Pirates get another point in the anti-piracy campaign against them as Senator Bong Revilla (right) and OMB Chairman Edu Manzano (Left) express their displeasure on one another's responsibilites as law enforcers.

Both government officials expressed their disappointment after an anti-piracy raid at Makati Cinema Square. Edu reportedly called Bong's participation an "interruption" because, aside from not coordinating with him about the raid, he also had the confiscated material brought to the street for a "photo-op."

Edu also said that he and Bong—who held the OMB chief post before Edu—had an agreement last Monday, December 3, about the latter accompanying him in a raid on Night Ruins located at Parañaque City. Revilla failed to show up on the said meeting but, instead, appeared at the Makati Cinema Square raid after the OMB search-and-confiscate operation.

Bong also said that he proposed a 1.5 million peso budget for the OMB, so he was wondering why would Edu say such things against him.

MOLE INSIDE OMB? Bong revealed to the media that a mole (spy) inside the OMB was giving information to the pirated DVD/VCD vendors. He has asked Edu to explain this.

It was reported that the mole, in exchange for tip-offs on upcoming raids, received about one hundred pesos per vendor for every week.

Edu shot back, "talk is cheap. It is easy to make accusations but you have to prove it, e."