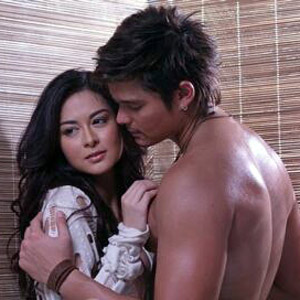 Marian Rivera and Dingdong Dantes continue to heat up local television as the Pinoy counterparts of Marimar/Bella and Sergio Santibañez of the hit show Marimar.


It has long been established that love teams sell, especially in the Philippines. When two stars have already developed a secure fan base, it won't be long before movie producers and TV stations start to bank on their popularity and fame to cash in on ticket sales and TV ratings.

Individually, the stars might make a decent hit on their own but pairing up with an onscreen partner is considered a formulaic route to make it big in an industry that is supported mostly by hopeless romantics. Sometimes, the whole is definitely more than the sum of its parts. In this case, the love team that is formed can become even bigger than the stars themselves. For this reason, Filipinos will continue to remember with fondness their favorite love teams—Sharon Cuneta and Gabby Concepcion, Nora Aunor and Tirso Cruz III, among others—long after their sweetness onscreen fizzled out and they went their separate ways.

As the year comes to a close, PEP (Philippine Entertainment Portal) takes note of the new pairings that came to the fore this 2007. These are the love teams who have warranted their own show and/or movie. They also include stars who are already established in the business but are paired up with a new screen partner.

Whether or not they are real-life partners, their tandem onscreen generates enough spark and "kilig" moments to sustain the interest and support of their loyal fans. Meet the emerging love teams of 2007.

When the Ultimate Dance 4 (UD4) was introduced to the public early this year, Shaina Magdayao was paired with Rayver Cruz while John Prats had Maja Salvador as his dance partner. The 10-track UD4 album featured Dance Floor Heartthrob Rayver and the Dance Floor Sweetheart Shaina as well as the Dance Floor Dynamite John Prats and the Dance Princess Maja. The two pairs even had their own segment in ASAP ‘07 where they showed off their dancing skills.

Shaina and Rayver were then paired in the youth-oriented show Star Magic Presents: Abt Ur Luv and the fantaserye Rounin. Art imitated life when Rayver played a suitor to Shaina's character in Happy Hearts. After watching their launching movie from Regal Entertainment, Shaina's sister Vina Morales said that she would be glad to see Rayver become part of their family.


In the upcoming Metro Manila Film Festival, their tandem will once again be seen in the entries Bahay Kubo from Regal and Katas ng Saudi from Maverick Films.


It has been reported that John Prats has been courting Shaina for the past two months. However, he clarifies that he has no intention of breaking up the Shaina-Rayver love team that has been established. For his part, Rayver is said to be the onscreen partner of Maja in the upcoming ABS-CBN TV series titled Anna Liza.


Will they switch partners come 2008? Only time will tell.

Mother Lily Monteverde, the matriarch behind Regal Entertainment, is pushing for the love team of Maja Salvador and Jason Abalos. In My Kuya's Wedding, Maja is a city girl who develops an unexpected romance with the braggart character played by Jason. Given the success of their launching movie as a love team, a follow-up project is now in the works.

Showbiz newbie Jason admitted that he admires Maja and had already started courting her. However, his First Day High co-star still has so many dreams to achieve, so he decided to stop his courtship so Maja can concentrate on her career.


What makes their love team click is the fact that Maja is considered the girl-next-door type while Jason is seen as the boy-next-door. Maja is talented girl who can sing, dance, and act—making her a versatile star who can stand on her own.

However, she found a new loveteam partner in the person of Jay-R Siaboc of Pinoy Dream Academy who was introduced in the teleserye Pangarap na Bituin. Like Jason's character, Maja also expressed her disdain for Jay-R's role but eventually came to realize what a good guy he is.

StarStruck Batch 4's Ultimate Loveteam was originally Kris Bernal and Mart Escudero. However, in real life, the Ultimate Hunk Aljur was already smitten by the cheerful Kris. This love triangle was translated onscreen in the GMA-7 youth-oriented show Boys Nxt Door wherein Kris became the object of affection of two half-brothers played by Mart and Aljur.


In the course of the program, another character was introduced in the show: the ex-girlfriend of Mart played by Jenica Garcia. From then on, she became the love team partner of Mart, thus breaking up the Kris-Mart tandem. Kris admitted to PEP that she felt hurt by the split but it turned out to be a blessing in disguise since she could now be teamed up with Aljur.


This was followed by another project, Zaido: Pulis Pangkalawakan, where Aljur became the Red Zaido while Kris became his love interest as Amy.

When Jean Garcia's daughter entered showbiz, there were fears that she might not be able to get out of the shadow of her famous mother. However, with the barrage of projects coming her way, it seems that Jenica Garcia is getting her own share of the limelight.

In fact, Jenica got her big break in showbiz via the primetime show Impostora, wherein she played the girlfriend of Mart Escudero. It was a challenging role for her, especially since she experienced her first real and onscreen kiss in the said drama series. While taping for Impostora, Mart became attracted to Jenica, incurring the irritation of Kris who was supposed to be his love team partner.

Jean points out that her daughter is still not yet committed but it seems that Jenica has an understanding with Mart. However, she is quick to point out that her 17-year old daughter is also entertaining non-showbiz suitors.

The mother and daughter team have worked together in the Regal Entertainment film Hide and Seek. It was also in this movie where Mart played a persistent suitor to Jenica, much like his role in real life.

The Basketball Hunk and the Commercial Babe developed a romance while they were housemates during the second season of Pinoy Big Brother. Despite the negative image that Wendy Valdez garnered when she flared up inside the PBB house, the former beauty queen still finished as Pinoy Big Brother's Third Big Placer, receiving over 1.2 million votes.

The Kapamilya Network used this popularity as the basis for Wendy's own TV series titled Margarita. Wendy played the title role and had Bruce Quebral and Diether Ocampo as her leading men. She portrayed a woman who became a showgirl in order to earn enough money for her family. Margarita aired for less than two months on ABS-CBN but there are plans to include Wendy in the upcoming TV series Palos starring Cesar Montano and Jake Cuenca.

Their paths crossed when they were all living together inside Big Brother's house. Gee-Ann Abrahan was being pursued by two hunks of PBB Season 2—the Fil-German Mickey Perz and Bodie Cruz, the son of actor Tirso Cruz III and Lyn Ynchausti. They provided plenty of "kilig" moments while inside PBB and when all of them got out, they were tapped to provide the main characters of the "Bumalaka Bulalakaw Boom" episode of Love Spell.

Since Gee-Ann was torn between her two suitors, it was left to the viewers to decide who will end up with her in the mini-series of Love Spell. Mickey was even given his own dance segment in ASAP 07, along with the Samba Dancing Diva Saicy Aguila.

Who could forget the unbeatable tandem of Marian Rivera and Dingdong Dantes in Marimar? The Pinoy remake of this Mexican telenovela is as phenomenal as it was during the time Thalia played the lead character who exacts revenge on her tormentors. With its 40+ percent ratings, Marimar has been consistently holding the No. 1 spot in TV ratings released by AGB Nielsen Philippines among Mega Manila households.


It is a well-known fact that Dingdong is committed to his ladylove Karylle and he constantly reassures her and the public that his heart still belongs to the daughter of Zsa Zsa Padilla.

Even when Marian was still auditioning for the role of Marimar, Dingdong was already impressed by his co-star. "Nang mag-Marimar siya, talagang parang may total transformation na nangyari sa kanya. Na-imbibe niya talaga ang pagiging Marimar," says Dingdong about Marian. This is probably why Filipinos will continue to be inflicted with the Marimar fever...Awww!

In his last project titled Lupin, Richard Gutierrez was paired with sexy sirens Katrina Halili and Ehra Madrigal. As a thief, he often relied on his lady sidekicks to bail him out of sticky situations. This time, Richard will have two other female supporters (in addition to Ehra) as he embarks on a mission to save humans and half-mortals in the fantaserye Kamandag.

The matinee idol and Maxene Magalona were supposed to have been paired in the fantaserye Mulawin but she made studies her priority. The plum role was offered to Angel Locsin instead. Now that Maxene is a fourth year college student taking up Social Sciences at the Ateneo de Manila University, the daughter of Francis Magalona now has free time to pursue her showbiz career.

As for StarStruck Batch 4 Ultimate Sweetheart Jewel Mische, Richard himself told PEP: "Ever since, I wanted to work with her already. I suggested her, ‘di naman requested, sa brainstorming ng GMA. Also, she fits the role [in Kamandag]."

Aside from this, fans of the Richard-Jewel tandem can look forward to their upcoming movie from GMA Films titled Dagaw.

Despite the seven-year age gap between Angelica Panganiban and Derek Ramsey, the reel- and real-life couple doesn't have problems when it comes to their relationship. In fact, they often defend each other, especially when talks about their sex video surfaced. The two just shrugged off the rumors and let it die a natural death.

Following the public's acceptance of their love team in Ysabella, Angelica and Derek will now be seen as new characters in Maging Sino Ka Man Book 2 of ABS-CBN. Derek plays Joaquin delos Santos while Angelica is Maria Lena Rubio, the half-sister of Jackie (Bea Alonzo).

These are the nine love teams that made their presence felt this 2007. If you have a love team you want to add, feel free to discuss them below in the comments section.