The Genius of Composer Levi Celerio 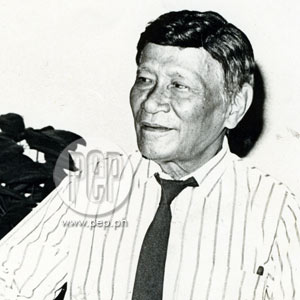 Prolific composer Levi Celerio died a pauper at the age of 91, yet his brilliance, reflected through his songs, truly enriched Filipino culture.

In an ideal world where artists are given their rightful due—Filipino songwriter Levi Celerio would be famous, with a fat bank account earned through royalty fees, live performances and commissioned projects. People would move heaven and earth just to shake his hand; a smile or a nod would be enough to elicit a proud grin from an admirer vying for his attention.

But all that is wishful thinking.

The prolific composer—who wrote over 4,000 songs, who was recognized by the prestigious Guinness Book of World Records for his ability to play a tune using a leaf, and who did so much to uplift the art of Filipino songwriting—struggled miserably to earn the Good Life.

Near the end of his life, Levi Celerio was hard pressed to pay his hospital bills and in dire need of support and acknowledgment. His pitiful condition prompted one newspaper columnist to comment bitterly, "This shouldn't be happening to him."

ESCAPE FROM SLUMS. Levi Celerio breathed poverty since day one of his life.

Born in Tondo on April 30, 1910, to Cornelio Cruz and Juliana Celerio, Levi experienced hardship as well as the joys of simple living. The young Celerio inherited his love of music from his mother, a mananahi (seamstress) who played the harp and was a member of the church choir.

Their squalid neighborhood filled Juliana with dread, thus encouraging her son to hone his musical talent, while keeping her fingers crossed that the task would distract him from his surroundings. Young Levi befriended the infamous gang leader Asiong Salonga and was even regarded as a close mate, not just a neighborhood acquaintance. Juliana feared for her son's future.

On his mother's encouragement, Levi picked up the violin at the tender age of 11 under the guidance of a Philippine Constabulary [PC] musician. To Juliana's delight, Levi enjoyed playing music and juggled his time as a band member of a PC combo and as a student at Torres High School.

Levi Celerio took his music exposure seriously. He completed two semesters of a violin course at the University of the Philippines Conservatory of Music. His talent caught the eye of Director Alexander Lippay, who gladly recommended Celerio's scholarship at the Academy of Music in Manila. The scholarship opened the opportunity as well for the young musician to join the Manila Symphony Orchestra as its youngest member.

Bad luck struck, however, when Celerio fell off a tree and broke his wrist. The accident dashed his dream to become a professional violinist with the Symphony Orchestra. To make ends meet, he worked temporarily as a comic illustrator—another facet of Celerio's talent.

FROM POET TO SONGWRITER. Exactinformation on how Celerio went into songwriting is scarce. Critics blame Celerio's unwillingness to share personal facts with reporters during interviews.

However, accounts say that prior to weaving song lyrics, Celerio tried his hand at poetry while performing as a humorist in the orchestra of Premiere Productions. He idolized the Tagalog poet Jose Corazon de Jesus (Huseng Batute) and was particularly fond of "Ang Bato" for giving him moral lessons to live by, especially in appreciating little ordinary things, Della Besa wrote in The National Artists of the Philippines.

But Celerio's poems failed to impress publishers who saw these as "lacking in style." In the 1930s, a certain Santiago Suarez was looking for a lyricist and was referred to Celerio. Again, it is unclear why Celerio's name surfaced in the recommendation, given his inexperience as a songwriter.

Whatever the term "lacking in style" meant in the world of poetry back then, it certainly was not applicable in the field of songwriting. Celerio composed the theme song of Dalagang Bukid, a film topbilled by actors Rogelio de la Rosa and Rosa del Rosario. At last, the proud son of Tondo found that his poetry mixed with melody and rhythm could produce "magic."

Almost overnight, the rejected poet became the most sought-after lyricist in the country. Celerio's proficiency, dedication and work speed is legendary. People who worked with the man said that he could furnish song lyrics in 20 minutes, using a borrowed pen and the inside of a cigarette pack as paper.

Music composers Ernani Cuenco and Restie Umali recalled how they would bring a tune and sit idly while waiting for Levi to put on the words like a true master of his craft. This breathtaking pace resulted in a wealth of materials: songs that took on various themes—love, cherishing life, nationalist sentiments and philosophy.

"Sa Ugoy ng Duyan" is one of Celerio's compositions, with the music of his equally renowned colleague Lucio San Pedro, that has been interpreted by so many singers that it is as familiar as our national anthem.

Many OPM scholars attribute Levi's humble background to his success as a composer. His lyrics don't come across as forced. They are delivered in a natural, relaxed manner that is typical of Pinoy conversation on the streets.

"There is no formula for my songwriting success," Celerio once told a reporter during a rare moment of open introspection. "My cardinal rule is to write simple lyrics that do not offend anybody's sensibilities."

RECOGNITION AND CITATIONS. Celerio's talent and massive contribution to the Filipino culture were recognized by some award-giving groups through the years.

In 1991, he was conferred a Doctorate in Humanities by the University of the Philippines. Prior to this, he was recognized in 1983 by the Popular Music Foundation of the Philippines, The Lifetime Achievement Award from the Film Academy of the Philippines (1989), Gawad CCP Para sa Sining (1991), and Natatanging Gawad Urian from the Manunuri ng Pelikulang Pilipino (1993).

Celerio won attention abroad when he was a guest in The Merv Griffin Show. Accompanied by 39 musicians, he performed the song "All The Things You Are" while playing a blade of grass like a harmonica. The Guinness Book of Records recognized Celerio's extraordinary talent: "The only leaf player in the world is in the Philippines."

The frustrated poet vindicated himself against those who judged his poetic aspirations with the publication of his two books: Filipino Palindromes and Take It From Levi, a collection of his love poems.

On October 9, 1997, then president Fidel V. Ramos proclaimed Levi Celerio the National Artist for Music and Literature (Proclamation No. 1114).

TWILIGHT YEARS. American composer-singer Neil Sedaka, who was popular in the '60s and '70s, once said, "It's a shame that when a record is on the radio, they mention only the singer."

The sentiment is shared by all "mere" songwriters worldwide. But in the Philippines, on-air recognition is a far simpler concern compared to the issues of unfulfilled royalty and just compensation for their compositions.

Levi Celerio, for all his artistic brilliance, was no match for the unjust system dominating the local music industry. Like all Filipino composers and musicians, he had to contend with the meager sum allotted for royalties. Most of the time, Celerio's friends protested, his royalties went unpaid and uncollected.

Even while being battered by ill health and with age taking its toll, Celerio never ceased from performing, both for survival and to satisfy his unflinching love of music.

At 87, with one eye ravaged by glaucoma, Celerio frequently played the violin at the Camelot Hotel bar or in some small venues that were willing to have him. Despite his romantic nature, Levi had gone through four failed relationships that produced 12 children. He was basically alone and living at the Camelot Hotel through the good graces of its management.

Some of those who encountered him during the twilight of his life were astounded with Levi's unfaltering optimism. Writer Della Besa wrote that the prolific lyricist never lost his sense of humor in the face of poverty. "There is no rancor or bitterness in the man," Besa described Celerio.

On April 2, 2002, the great Filipino composer died at the Delgado Clinic in Quezon City at the age of 91. Celerio's death came two days after the passing of his National Artist colleague, Lucio San Pedro.

Even in death, the public recognition that had long been snatched from Celerio still eluded him. His passing was overshadowed in the news by the death of popular matinee idol Rico Yan.

In recognition of his brilliance and contribution to the Filipino culture and arts, National Artist Levi Celerio was buried with full military honors at the Libingan ng mga Bayani.

The songs outlive its creator. Levi Celerio's legacy remains forever in the hearts and spirit of all Filipinos.