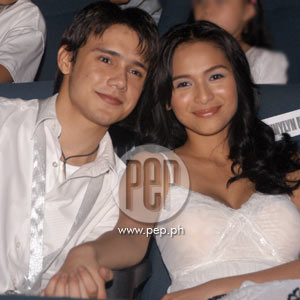 The real life romance of Patrick Garcia and Jennylyn Mercado will be 'tested' in GMA-7's remake of the 1987 classic Maging Akin Ka Lang.

The pictorial took place last November 29 and rumor has it that Patrick was against Jennylyn's decision, thus his no-show during the shoot.

"Yon yung may nangyayari sa [Manila] Peninsula [hotel in Makati]," explained Jen initially on behalf of her boyfriend. She meant the standoff instigated by Senator Antonio Trillanes and some of his supporters in a coup attempt that day.

Jennylyn recalled Patrick's response the moment she told him about the shoot. "Parang 'teka lang ha, anong isusuot?'" For the StarStruck luminary, Patrick's reservation was understandable.

FROM REAL TO REEL. By now, word is out that GMA-7 has decided to bring the couple's romance to the screen as well.

Doing a remake of a masterpiece is tough enough, more so for Patrick and Jennylyn as they also have to think of the pairing and its commercial viability.