Almira Muhlach has had enough of husband Bong Alvarez's aggression 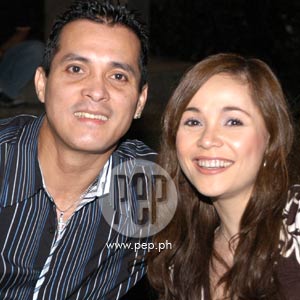 Former actress Almira Muhlach is so fed up with her husband Bong Alvarez's violent ways that she has decided to leave their home together with her children.


Former actress Almira Muhlach finally gives up on her husband, former basketball player Bong Alvarez, by filing a restraining order against him because of his violent fits. It can be recalled that this is not the first time Bong was involved in an aggressive confrontation.

According to an informant interviewed by The Buzz, it was on December 14 (Friday) when Bong arrived with his buddy Alex Crisano in a bar in Tomas Morato at 1 a.m. By the time he got home at around four to five a.m, he was allegedly so drunk that he smashed almost everything inside their house, including their car window.

Almira had to drag their children out of the house to avoid getting hurt. Bong wasn't exactly done with Almira, however, as he texted her with threats like committing suicide or setting their house on fire.

Almira tried to return home to get the eldest daughter but Bong wasn't exactly ready to give her up. According to a reliable source, Almira was very scared about what Bong might do to their daughter.

The following day, Almira went to their barangay hall and filed a protection order.

FRIENDS KNOW MORE THAN THE FAMILY. The Buzz tried to get a statement from Bong and Almira but both of them refused to tell their side of the story. Relatives, however, were able to help shed some light with text messages.

Close friend Anthony Pangilinan confirmed that there was indeed a problem within the family, but it was nothing serious.

"Yes, some damage caused at home but Almira wasn't hit. She wasn't admitted to a hospital... Bong willingly entrusted his daughter and his family to our temporary care... There is hope this Christmas," the husband of Maricel Laxa said.

Ruffa Guttierez, a close friend of Almira and co-host of The Buzz, read this text message from Almira. "Thank you very much for all of your concern. Please don't worry; I'm now in a safe place with my kids. I know you understand. I'll talk when I'm ready."

After the segment, Ruffa announced that Almira with her kids and Bong would temporarily live separately in order to work things out.