Aiko Melendez is now at peace with her life 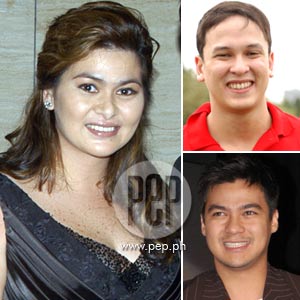 Actress-politician Aiko Melendez is oozing with positive aura since she has become closer to ex-husband Jomari Yllana (inset, bottom) and put closure to her rift with estranged husband Martin Jickain (inset, top).

Controversy after controversy has hounded actress-politician Aiko Melendez through the years, but she is all smiles this December as she celebrates her birthday and Christmas with a positive aura and a relaxed attitude. In a live interview with The Buzz yesterday, December 16, Aiko talked about her experiences and how she has managed to turn everything positive for her.

The slimmer and younger-looking Aiko also praised former flame Jomari Yllana and his current girlfriend, Pops Fernandez. The Buzz co-host Boy Abunda commented, "You have become even closer to Jomari."

"Oh, yes!" Aiko said with no hesitation. "Our relationship now has been the best."

It has been said that Pops was thankful to Aiko for understanding her.

"Love ko siya," Aiko fondly said about the Concert Queen. "We text each other and nakakatawa kasi ilang days lang apart ang birthday namin, so I guess the same ang wavelength namin. I don't want to be unfair sa past girlfriends ni Jomari, pero I will be very vocal about this: Si Pops ang pinakagusto ko sa lahat."

The public has been wondering about the status of Aiko's annulment case against her husband, Martin Jickain. Are there any updates? How is she and her soon to be ex-husband Martin now?

Aiko explained, "Yung annulment, nasa korte na. As much as I want to talk about it, e, I can't. In all fairness to Martin, nag-greet siya sa akin today [for my birthday]. Kaya siguro sobra ang aura ko today is because I'm at peace. Kasi for such a long time, puro masasakit na salita ang palitan namin ng text... Pero today, may closure na magpatawaran na at kung hindi man maging maayos as mag-asawa, e, be the best parents for Marthena [their daughter] na lang."

Marthena, by the way, spends quality time with her father every Sunday.

Last Monday, Aiko left for Hong Kong on a business trip. Little did she know that a rumor had come out as tabloids were quick to post news about her going out with a Chinese guy. So detailed was the story that it also said that Aiko and the mystery guy were seen holding hands. But Aiko denied this.

Ruffa Guttierez asked Aiko what lessons she has learned this year and what she expects in 2008.

"Siguro, Mare, pareho tayong may natutunan," Aiko knowingly said as the crowd erupted into laughter. In case you don't know, Ruffa also had similar problem with her Turkish husband.