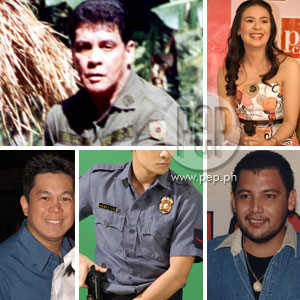 Pinoy action films used to be very popular. But after the death of Fernando Poe Jr. in 2004, the movie genre suffered a blow. It will be hard to replace Da King, but aspiring successors can give it worth a try.

Filipino action films never fail to draw crowds, especially with big names like Fernando Poe Jr., Robin Padilla, Rudy Fernandez, to name a few. Pinoys troop to the movie houses to watch their favorite action star beat all his enemies. They don't mind that the plot may be similar to the action flicks they've seen before, or that the action and the ending are predictable.

With the help of web bloggers, we concentrate on the clichés used by filmmakers and writers when producing an action film. Moviegoers keep seeing these hackneyed formulas in different Pinoy action films, but they don't seem to mind—they watch the films anyway.

THE USUAL PLOT. It's either Revenge or seeking justice and fighting for what is right.

Case in point: A retired or former policeman (the protagonist) lives a quiet and simple life. Suddenly, a leading lady enters the scene. Unfortunately for the good guy, the leading lady attracts not only the hero but the bad guys as well.

Typical setting—a club, a KTV bar, or a sari-sari store. The bad guys, or goons if you prefer, start harassing the beautiful, sexy leading lady. The protagonist jumps in and starts taking them out one by one (which is odd, by the way, since the goons were practically waiting in line to get their butts kicked even though they outnumber the good guy, 10 to 1).

This first action sequence is important; it showcases the protagonist’s hand-to-hand fighting style. After the incident, the leading lady falls head over heels for the good guy and the goons report this uber man to their boss.

After the top bad guy receives the news, he proceeds to deliver a message to the good guy’s home by peppering it with bullets, killing his father or mother.

The good guy cries in the rain (rain adds more drama) and vows revenge. The newfound girlfriend will talk to, or even beg, to discard vengeful thoughts.

After readying themselves, the good guy and leading lady then carry on to the bad guy’s lair and finish them all! Hurrah!

WHAT MAKES THESE MOVIES CLICHÉ. Now that we’re aware of the plot, let’s proceed to the main ingredients of these action films by pointing out the attributes of each and every one of them. Let’s start out with the Bida.

Bida. This is the main character of the movie so it’s imperative that HE should not die (Filipinos love happy endings and it can pave the way for a sequel). The looks of this character should be good-looking and can carry a cool swagger. The character also has to be polite but should be wisecracker as well (for those comedy moments).

Whether from the army/police or not, the man knows how to use guns and by Jove, he can use it with effectiveness as if each bullet can home by itself to its enemies.

Even if the good guy is outnumbered 100 to 1, he still manages to kill everyone (and with style!) in just 6 minutes or less. Thanks to his trusty .45, he downs every goon with precision that can leave real-life snipers awestruck. The character’s handgun should also be special because it’s the only gun in the world that can blow up cars, nipa huts, and trees.

The bad guys, armed with rifles, grenades, and rocket launchers, fail to get bead on the good guy. Even at close range, they hit nothing but dirt. If they however, manage to wound the character, it should be in the arm (preferably on the left because a lot of action stars are right-handed).

The Leading Lady. Leading ladies should come out of a men’magazine. They should also provide a kind of loving warmth to the bida once he experiences his “lost loved one” phase. If the bida is hurt, she provides the first aid. The leading lady should also know how to shoot a gun. If not, then provide the bida with a gun or two.

The leading lady, more often than not, is usually the reason why the bida got into the bad guy’s hair. Then she will plead to the bida not to go into battle with the bad guys. In some cases, the leading lady will fight alongside the bida.

By the end of the movie, they kiss and walk away.

Don't forget the sidekick. Adding a sidekick to the movie isn’t exactly a requirement, but they add bonuses to the movie. Here are some:

Kontrabida's Rule of Thumb. The antagonist of the movie should be an older guy; he's rich, so he can afford to hire goons. He should also be ugly of scary-looking, if not, should have a violent temper (anything just to give the leading lady a reason to despise him). Since he's rich, the kontrabida should be a gambler, or heavy smoker, or drinker. These vices add that “I’m very bad” look to his aura.

The kontrabida is also a loving father as he calls his goons “mga bata.” He provides them with enough gear to start a small war. His fashion sense is notable that in even in midday, he and his goons still wear leather jackets.

He also lives in a big house, but usually, he settles in an old warehouse, where the final shootout scene would happen.

The kontrabida comes out to play after all his goons are dead. Fortunately, he has this ability to seriously wound the bida. In hiding, they both find out that they’re at their last ammo clip—which should lead to an exchange of pleasantries between the two of them: “Dudurugin kita! Blah blah blah!” and “Ipaghihiganti ko tatay/nanay/kuya/ate ko! Blah! blah!”

The Police! Who wouldn’t remember the climatic “Huli na ang lahat, no!” grand entrance of the cops? It never fails. They always come in after the firefight.

In the commotion, they arrest every person in sight except the bida (shouldn’t the bida also be brought in for questioning as well?). Anyway, they’re a great addition to the final scene as the bida and company walk away and the credits go up.