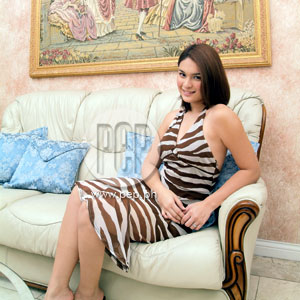 It’s hard for some teen stars to talk about themselves. Either they’re too shy or, as is more often the case, their life has been uneventful so far and they have nothing interesting to talk about. Eat Bulaga host Pauleen Luna is the exception.


This warm 19-year-old has so many things to say! And, boy, are those things quotable.


Whether it’s about her weight, boys, or work, she’s game. She’s truly an artista: she knows she owes it to the public to talk about herself openly.
Even as a young girl, she admits, she was already an extrovert: “I’m, like, the performer in the family. Like, I’d always copy Dayanara Torres. Di ba, dati, may Eezy Dancing siya? Ginagaya ko talaga lahat, sobra.”


The teener was soon launched in Star Circle Batch 11, the batch that included Paolo Paraiso and Abt Ur Luv star Carla Humphries. Pauleen starred in the ABS-CBN shows Bora, Qpids, and Marina, and appeared in Berks and MTB, Ang Saya-Saya.


The rising star was under contract with Star Magic for two years when, in a controversial move, she opted to jump ship.


Her decision sparked a flurry of comments on the ABS-CBN website. Some were nice (“it was a wise move perhaps for Pauleen,” wrote lilsweetcotton) and others not-so-nice (“hinahanap na nya ang pagkalaos nya e to think na di pa sya sumisikat ano,” wrote jo_ey).


Pauleen confirms the long-standing rumor: the move was because of Kristine Hermosa and Diether Ocampo.

Did Kristine confront her? “Oo, e.”

Pauleen knew that ABS-CBN wasn’t big enough for her and Kristine. The lesser star had to leave.


“Parang I felt na there can only be one princess in a castle—and that’s her.”

’NAY LOLIT. Leaving ABS-CBN wasn’t easy for Pauleen. In fact, she lost some friends in the process.


“I used to be Ms. Congeniality in ABS,” she says. “I mean, I had a lot of friends. I mean a lot, and I thought everyone was my friend. And when I transferred, then I realized, hindi pala lahat kaibigan ko.”

She also had to look for a new manager. She asked the help of entertainment writer Allan Diones, a close friend, who told her: “Sige, may ipapakilala ako sa ’yo. Try mo kung gusto mo.”

A NEW CASTLE. Thanks to Lolit’s clout, Pauleen landed projects in GMA-7—Pinakamamahal, Etheria, and, of course, her biggest gig, Eat Bulaga.

When Pauleen talks about Eat Bulaga, it’s obvious that she’s more than just enjoying it—she’s loving every minute of it.

“Nakakatuwa talaga. It’s like going to school, and you have classmates and you have teachers. Parang sina Tito Joey de Leon, they are like our teachers. Sila ang mentor namin, and you have to be there, at this time, and then dismissal, gano’n. Para siyang everyday school.”


On Eat Bulaga, the hosts and co-hosts—who call themselves dabarkads—are just one big family. There’s no competition, no tiffs, no tension. Finally, this girl can breathe.


“Kami, parang natutunan namin na kanya-kanyang oras, at saka we all have different characters. Iba-iba naman ’yong nao-offer namin sa mga tao. Like, I can never be Gladys Reyes, I can never be Ciara Sotto, I can never be Julia Clarete. But they can never be me also. Hindi kami nagseselos sa isa’t isa.”
Eat Bulaga and GMA-7 have become her home. “I think I’m gonna stay there, period!”


It seems like this princess has finally found her own castle.