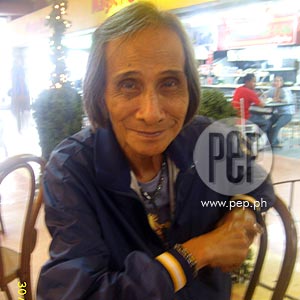 Reynaldo Hipolito, popularly known as Palito, knows fully well his asset that endeared him to the viewing public. "Nagustuhan ng tao ‘yong kapayatan ko," he acknowledged good-naturedly. Aside from doing comedy, the theater-trained actor was also a drummer and recording artist, and he wrote storylines during his prime.
A few streaks of gray hair plus some signs of aging are not enough to render the man unrecognizable.

"Kanina, bago ka dumating, may apat na nagpa-picture sa ‘kin," he boasted to PEP (Philippine Entertainment Portal) over a cup of cappuccino inside a popular coffee shop in downtown Manila.

Such crowing despite the comedian's years of inactivity can make a listener smirk with amusement or out of plain annoyance. But passersby threw him glances of recognition and that was enough to put doubt to rest.

DISCOVERING THE STAGE. Reynaldo Hipolito was only 21 when he first discovered the world of stage acting. So enamored was the skinny student of Arellano University in Manila that he decided to choose acting over his studies; but of course, much against his parents' protests. That was around 1959.

Soon his theater exploits led him to the glitzy world of the silver screen. With his gaunt frame and looking like a plain man-on-the-street, one would think the theater trained youngster could not bag any lead role.

Like any other upstart, Hipolito had a handful of cameo roles in his resumé. Some roles were so small that he could not even glimpse his image in the final edit of the film. Vividly he recounted one incident when he dragged his parents to the moviehouse to see one of his films.

But Hipolito's plan to make his parents proud backfired—though comically—the minute his supposed scene, which was shot in Intramuros, Manila, was supposed to unfold on the big screen. The proud son was only one in a multitude of uniformed extras.

BECOMING PALITO. Hipolito's distinct emaciated frame would serve as his ticket away from doing bit roles.

He said that his toothpick frame is not a result of genes or illegal drugs.

Whether it's a good thing or not, his appetite when it comes to food has always been modest. "Kasi ako pag busog na, ayoko na. E, karamihan pag busog na, ayaw pang umayaw."

Palito, which in Spanish means matchstick, perfectly suited Hipolito's thin physique. But more importantly, the moniker gave the former film extra a catchy name and an identity that perfectly played on Filipino sensibilities, especially in comedy.

Soon, major film outfits began casting him in their movies—most of which were considered slapstick. Palito lost count of the of films he did, nor does he recall when they were shown, although he reached his peak during the ‘70s all the way to the ‘80s.

It was Palito who thought of the title, Rambuto, which was a tribute to his slight figure. He was also credited for spoofing another Stallone film, First Blood.

Film producers capitalized on Palito's physical appearance, thus he was often given the role of a zombie or a corpse. The latter role made the man such an expert that he developed a diva attitude before he agreed to occupy a casket.

Scrutinizing a casket was his only hang-up. But Palito gladly obeyed whatever his director would ask him to do.

"Kaya tinawag na motion picture, kasi you have to pretend," he lectured. Sounding like a true scholar of acting, he added: "You have to act kung anong pinapagawa. Walang problema [sa ‘kin] yon."

SEMI-RETIREMENT. Palito lay low during the ‘90s although he sporadically appeared on some comedy films together with some of his contemporaries. His last movie appearance was last 2005 in a movie titled, Enterpool: Senior Citizen in Action. The movie failed to generate attention and Palito never faced the camera to act since then.

Money was very good during his heyday. Unfortunately, failed business ventures combined with financial mismanagement left him with little fortune. Currently, he earns his keep by doing small live shows—which are "sobrang dalang" and "bihira," he admits—usually with the help of some friends in the industry. He is fortunate that his children are all professionals who see him through in his personal needs. He also makes money from fees usually given by TV programs in exchange for interviews.

Palito, who never gained weight, is happy that he was given an opportunity by Pinoy boxing icon Manny Pacquiao to be part of his upcoming Metro Manila Film Festival entry, Anak ng Kumander.

The 74-year-old comedian likened Manny to the late action king, Fernando Poe Jr., for his generosity and kind heart in extending a hand to some forgotten actors and other "small" people who make their living in the entertainment industry.

Despite lost glory, Palito said that he is happy and content with his current lifestyle. He showed us some of his cherished pictures during his active years, turning the pages of a cheap photo album nostalgically.

Sensing that he was starting to be emotional, he closed the photo album hastily, and putting grief at bay. "Pero kahit ganito ko, wala akong sakit," he smiled, taking a drag on his cigarette. Smoking is his only vice, he pledged.

Minutes later, a passerby waved and Palito returned the gesture before setting his eyes back on the recorder placed a few inches from him. Taking a sip from his cappuccino, the former comedian flashed another smile. He still enjoys the attention.