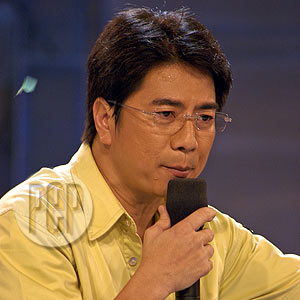 Several users of YouTube have uploaded videos of Willie Revillame rehearsing a wheel that is used as a prop in the now defunct segment "Wilyonaryo" of his game show on ABS-CBN, Wowowee.

A few hours ago, registered users of the site uploaded videos in the video-sharing site YouTube titled "Kita Nyo?" that show how Willie and his co-hosts Mariel Rodriguez and Valerie Concepcion rehearsed various scenarios involving the same person and the same golden wheel used as a prop in the "Wilyonaryo" segment of the Wowowee.

The registered user named "absmadaya" uploaded a three-minute video while "gaboikent" shared a five-minute video showing the same rehearsal of Wowowee. Willie and his co-hosts are practicing the segment "Wilyonaryo," wherein the contestant is asked to choose a colored wheel. In this video, Willie practices opening and closing the flap that covers the number inside.

A technical staff member of the show puts a gold wheel in the middle and Willie tells him, "Masikip talaga." The male staff member makes adjustments and helps him "operate" the gold wheel. Willie rehearses changing the number inside the gold circle. He opens the flap to reveal a portion of the number that makes it undeniably a number five, but then he closes the flap again and it appears to be the straight edge of a totally different number. But when Willie pulls it off completely, it is again a number five.

In the first scenario, Willie opens the gold wheel revealing a number 5, indicating that the contestant wins P500,000. The co-hosts and the backup dancers all rejoice at the good fortune. As the video continues, they also rehearse the scenario wherein a number zero is revealed using the same gold wheel. The contestant loses, to everyone's dismay.

"Wilyonaryo" is the controversial segment wherein Willie accidentally showed the wrong number in the jackpot portion of the August 20 episode of the noontime show. It also started the word war between Willie and fellow TV host Joey de Leon of rival program Eat Bulaga. The Kapamilya network explained that the mistake was a result of a "technical glitch." By October, Wowowee discontinued the segment and replaced it with the "Merrygalo" segment.

When asked to comment about this rehearsal video, ABS-CBN Corporate Communications Head Bong Osorio told PEP (Philippine Entertainment Portal), "That's an old issue. That has been going on for months, it stopped...We don't know why it's resurfacing. It's an old issue. It has been discussed lengthily in the tabloids, TV, and afternoon programs. It has quietly taken a back seat until this afternoon."

PEP asked him who could be the people behind this video and he answered vaguely, "I can only surmise..."

Continue reading below ↓
There are talks that the "leakage" of the rehearsal video may have been brought about by the TV ratings war going on.
Read Next
Read More Stories About
ABS-CBN, Wowowee, Willie Revillame
Post a Comment
Featured
Latest Stories
Trending in Summit Media Network