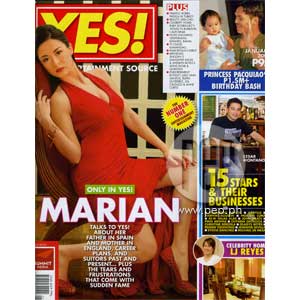 YES! magazine's January 2008 features Marian Rivera for its cover story. Her next project is the subject of discussion at the Kapuso network right now. Three starring roles are up for grabs: Dyesebel, Rosalinda, and Darna. Marian though is partial to Dyesebel, "Kung ‘yon ang ibibigay sa akin, willing akong mag-topless."

YES! magazine's January 2008 issue gets the lowdown on the hottest showbiz star of today—Marian Rivera.

In a 15-page story—interview by Jo-Ann Maglipon and written by Anna Pingol—YES! chronicles the life of this beautiful Spanish-Filipino mestiza who began in showbiz just two and a half years ago. She first landed plum roles in the afternoon drama Kung Mamahalin Mo Lang Ako, Kung Agawin Mo Man ang Lahat, and Pinakamamahal. She was awarded Best New Female TV Personality at the 2006 Philippine Movie Press Club's (PMPC) Star Awards for Television for her role in Kung Mamahalin Mo Lang Ako.

Everyone thought lady luck had frowned on her when she took mother roles in two television series—Muli and Super Twins. It was a sign that she would be relegated to the rank of supporting player.

But all that changed when the 23-year-old Marian clinched the coveted title role in Marimar. She has become one of showbiz's busiest stars.

In the last quarter of 2007 alone, Marian had to juggle a very hectic shooting schedule for three movies: Desperadas, Bahay Kubo, and her first Valentine movie A Very Special Love, which will pair her with matinee idol and fellow GMA-7 artist Richard Gutierrez. In between film shootings were tapings for Marimar and numerous print and ad shoots.

Marian also gets to share some personal and family photos for the magazine. We see her bloom from a cuddly, bubbly baby to the very confident and talented actress.

Also on this YES! issue are 15 stars with their own business. Cesar Montano leads the group of entrepreneurial stars. He has Bellissmo Ristorante, an Italian restaurant offering affordable fine dining.

Regine Tolentino has two business to keep her busy—a boutique where she sells her own creations and a dance studio that keeps her passion for dancing alive.

Not to be outdone is Marvin Agustin, who handles seven food businesses, which includes a branch of Mister Donut, restaurants Café Ten Titas and SumoSam.

YES! was also at the star-studded affair of Manny Pacquiao's only daughter, Princess. The party, estimated to cost about P1.5 million was attended by high-profile politicians and celebrities of all ages.

Catch more of the January 2008 issue of YES! magazine only at bookstores and magazine stands nationwide.