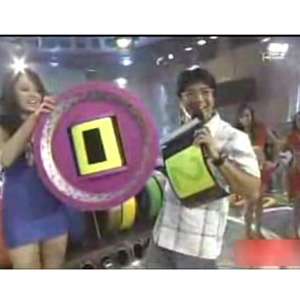 Some were funny, some became a serious issues. PEP lists down the unforgettable mistakes in showbiz in 2007.

Let us take a break from the more serious issues and controversies of local entertainment.Instead of talking about the scandals, gay issues, network war, etc., PEP will take you back to some of the headlines that made showbiz followers gasp, “Ooopps!!!”

Let us review all the memorable showbiz events that happened in 2007, and name the 10 incidents that fell under the “Showbiz Ooops” category.

Wowowee’s “Wilyonaryo.” Television viewers got surprised when the violet wheel of Wowowee’s segment “Wilyonaryo” showed “0” instead of “2” as its host Willie Revillame pulled the cover from the wheel. Upon noticing the mistake, Willie immediately said, “Mali-mali, sandali… ang two million…ay hawak ko pala!” But that was real-time, and millions of Pinoys were watching it.

The incident got published on PEP and in different publications. The actual footage was uploaded in a video-sharing sites. Later on, the issue led to a word war between Willie and Joey de Leon, the host of Wowowee’s rival show Eat Bulaga!

Willie and ABS-CBN management explained that they did not intend to cheat the players of “Wilyonaryo” and what happened was just a technical glitch. The issue died down and “Wilyonaryo” was replaced with a new game called “Merrygalo,” in time for the Christmas season.

However, another video was posted recently in YouTube showing the “rehearsal” of the discontinued controversial game. It showed how Willie and the staff of Wowowee practiced pulling the cover to show only one of the two numbers that contain the chosen wheel. But the video did not make any noise, unlike the first one, with people being more interested in the ongoing issue between ABS-CBN and AGB Nielsen about an alleged ratings anomaly.

Christian Bautista's unforgettable lines. The “Asia’s Pop Idol” Christian Baustista had probably the most embarrassing moment of his life when, while singing, he forgot to deliver two lines of the Philippine National Anthem “Lupang Hinirang”in a boxing exhibition between Gerry Peñalosa and Concepcion Bernabe last August 16 in Alabang, Muntinlupa.

People made a big deal out of it. Some said it was no simple mistake—he could be put in jail. However, instead of hiding, Christian bravely faced the public and apologized for his blunder.

In fact, in a statement he released the following day, Christian explained apologetically.

“I apologize to the Filipino people for the lapse of memory that occurred yesterday during my rendition of the National Anthem.

“I was recovering from a cold and the adrenalin and excitement of the moment got me through it. Unfortunately, it was at the cost of a momentary lapse on my part.

“I promise that my next rendition of our National Anthem will be faultless.”

And as a true singing artist, Christian said he was not traumatized with what happened. In fact, he is more willing to sing the “Lupang Hinirang” again if given the chance. He added, “Sinabi ko namang handa akong kantahin uli ang 'Lupang Hinirang' kung may pagkakataon. Sana nga, hindi ako magkamali uli. Nakakahiya na talaga kung magkaganoon.”

La Greta's juicy scoop. The information came out while Gretchen Barretto was reacting to Lani Mercado’s statement, “I have six beautiful children with Bong.” During that time, there was a snubbing issue between Gretchen and Sen. Bong Revilla at Lorna Tolentino’s birthday party.

The press people listening to her paused for a few seconds before saying, "Whaaaat! Bong has a seventh child?"

La Greta's statement was picked up by media but it was only after a month that Sen. Bong actually admitted he had a son.The boy was identified by showbiz columnist Dolly Anne Carvajal as Luigi. His mother’s initials were L. G., a married woman who belonged to a good family.

Even Bong’s eldest son, Brian, revealed that he and his siblings knew about their half-brother. In fact, he said in the same episode of The Buzz, "It's not new for us. Beforehand, we knew na madami talaga kami..."

During the taping of All Star K in Broadway Centrum last November 7, the beauty queen reportedly approached the young actress and introduced herself: “I’m Carlene, I know you’re Cristine!"

It’s public knowledge that Carlene has a son with her five-year boyfriend Dennis Trillo who, at that time, was linked to Cristine Reyes.

The incident even led Cristine and her sister Ara Mina to file grave scandal and oral defamation lawsuits against Carlene.But the case did not continue as Cristine’s camp initiated a meeting with Carlene after the latter gave her public apology to the young actress and to those who were taken aback by her sudden action.

PBB viewers waited for Mariel to come out of the PBB house and listened to her explanation about her statement. In The Buzz last December 2, Mariel reasoned out, "You know, when we say na parang a lot of people do this and I feel bad that I'm one of those people when we say na parang ‘Ay, showbiz ka naman, e.' Yung parang plastik, not plastik, but you know what I'm saying?

"It's just a term. It's not our industry. It's not our work. It's not my job. It was just a term, ganun. Sabi ko nga, I have no intentions or whatsoever, and I never will hurt anyone in the industry. If meron akong nasaktan, gusto ko talagang mag-apologize. I'm really very sorry. I didn't mean anything by it. I love my job.”

Aside from “kadiri ang showbiz,” the TV host-actress was also caught saying “baduy sa GMA ,” which is the rival network of her mother station ABS-CBN. And most recently, just a few hours before she went out of Big Brother’s house, PBB 24/7 subscribers witnessed how the TV host badmouthed housemate Riza Santos while having a conversation with Ethel Booba.

Is Mariel just being tactless, or honest? Either way, her statements still had people going, "Ooops!"

Misleading photos on the web. PEP remembers the photos received from the PEPsters who wanted to help in getting information about certain issues. Some of these are KC Concepcion and Lino Cayetano together in Hong Kong, Richard Daloia, and Gretchen Barretto’s “date” with an unidentified man.

The first two photos were actually published in Dolly Anne Carvajal’s column. Apparently, there was a mistake about these photos, they were what media people call “kuryente.”

About the KC-Lino photo, Dolly Anne wrote, “GOT this e-mail and picture from Kace Cayetano (kookikace@gmail.com) dated Jan. 26. Just homonymous, not synonymous to KC (Concepcion), huh? Looks like Lino Cayetano and KC are living it up—Paris, Manila, Bora, Tagaytay and now, Hong Kong. Before KC flew back to Paris, she and Lino spent a few weeks in HK, according to the e-mail sender.

“Oh, yeah! ‘The world will always welcome lovers as time goes by.’ What sweeter way to start the Valentine month than by seeing lovers whose worlds revolve around each other!”

The photo looked like Lino and KC were the only persons in the picture being sweet with each other.But later on a Multiply account revealed that the published photo was actually a group shot—KC and Lino with their friends.

Megastar Sharon Cuneta did not take the mistake lightly. She openly revealed her dislike for the published photo and its misleading caption.

The same boo-boo with the photo which was said to be Richard Daloia. The columnist said it was just sent by a reader.Upon searching in MySpace, PEP found out that it was a different Richard Daloia.

Gretchen Barreto also became a victim of leaked photos: the "kisscandal" with John Estrada kissing photos, which were confirmed by both parties, and the Gretchen “date” photos , about which the actress chose not to comment.

Missing: Ethel Booba’s Nose. On May 25, while the PEP staff was having a little rest with the contributing writers, PEPsters enjoyed their “freedom of speech” by writing comments about Ethel Booba's silicone implant in her nose.

Some readers even suspected that Ethel might not have bumped into a furniture but was punched by her then-boyfriend, Alex Crisano, causing her silicone implant to come out of her nose. Others poked fun at Ethel by creating stories around the accident. In short, the comments page looked like a chat room for PEPsters.

“In or Out? Am I In or Out?” Remember Sandara Parks’s song, “In or Out?” That is what the viewers of Pinoy Big Brother Celebrity Edition 2 were singing every time they watched the show.Why?

Here were some of the reasons: Ethel Booba exited voluntarily with Mcoy Fundales but she came back to the PBB house after pleading with Big Brother, who then made her one of the “big sisters.” Another returning housemate was Mariel Rodriguez who was a guest celebrity housemate and became “big sister” when she came back.

That did not stop there. Gaby dela Merced chose to leave the PBB house to attend a racing seminar in Arizona. After a few weeks, Gaby went back inside the house following the voluntary exit of Mcoy and Ethel.

Some asked, “Isn’t this a violation of the Big Brother House Rules and Regulations?” The answer was, “No.” According to the rules, “A new housemate may be called in to replace any person who leaves voluntarily or who has been disqualified by Big Brother. This replacement could be a former housemate who had previously been evicted.”

Big Brother also allowed some celebrities to stay inside the house as guest housemates for more than 24 hours, or even days. Among these were PBB host Toni Gonzaga, Angel Locsin, and Gladys Guevarra, who later also decided to exit voluntarily.

Stray cat gives Gladys Reyes a souvenir . Actress Gladys Reyes left her house to attend the presscon of Sine Novela My Only Love last November 7; she left the venue with a souvenir from a stray cat: a bite.

The actress was immediately given an anti-rabies injection to avoid infection—and then advised by her doctor to avoid sexual intercourse during her medical regimen of 24 anti-rabies shots.

The interesting twist to the story—10 days after that article was published, PEP came out with an article saying that Gladys is pregnant with her second child.

The actress explained that her anti-rabies vaccination would not have any bad effect on her baby.

Comediennes split an acting trophy . Celebrity guests and nominees thought that Pokwang was the sole winner of the Best Comedy Actress in the 21st Star Awards last November 18. But they were surprised when the presenter, Tracy Torres, also announced Tiya Pusit’s name after Pokwang gave her speech.

Unthinkable. Unexpected. Hilarious. These are the words to describe last year's blunders. Though celebrities look almost perfect to us, they too, are susceptible to making mistakes. The big difference: their embarassing moments get published, and even witnessed by millions of people. Showbiz will not run out of boo-boos, so be sure to say “Ooops" again this 2008.