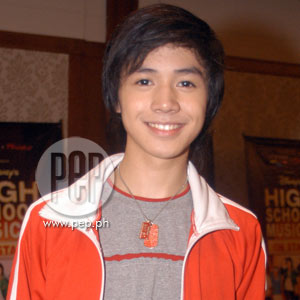 "They've always been there, the fans...the "Samsters", that's how they call themselves. And, they've always been there for me and I'm really thankful for them. They're the ones who actually keep me in the business. Another year and hopefully, we will all stand strong," Sam said about the strong support of his fans.

Sam Concepcion has grown a lot this year and is thankful for what 2007 has given him.

"2007 is a very blessed year for me ‘coz it's the year when I went back to theater. This year, I went back to doing musicals. High School Musical was a big hit," said the former winner of ABS-CBN's Little Big Star.

He played Troy Bolton in the Philippine version of the highly touted High School Musical, which had a run from June 23 to July 22.

His self-titled debut album was also released this year, and he has plans to do more.

"Of course I would want to do another album but I'm still concentrating on the first one at this time, coz I've only had two singles. Really, really great singles that were given to me," the teen star said about "Even If" and "Happy."

"After that, I was the spokesperson of the Department of Education. I feel blessed. I really, really thankful and, yeah, it's been a great year and I'm happy. Really, really very blessed this year," Sam said with a smile.

Sam also shared how his family celebrates Christmas. "We usually, like every Christmas, we stay home, that's how we celebrate Christmas. It's our bonding time with family in Manila. We stay there and we spend Christmas. And for the Christmas day, we go to our yearly reunion with the whole family, the Concepcion side. That's what we always look for every Christmas.

Sam is looking forward to what 2008 holds for him.

"Well, I just hope and pray that I will still keep doing what I love to. And of course, I plan to train and learn more about this. And I hope I will be able to share my music to the people," he said.