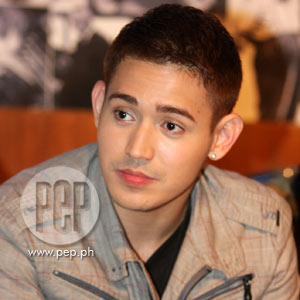 Young actor Paolo Contis keeps his fingers crossed, hoping that his lucky streak extends to 2008.
Paolo Contis has two entries—Banal and Resiklo—in this year's Metro Manila Film Festival. But during the annual Parade of Stars last December 24, the young actor chose to join the float of Banal.

Being part of two good movies makes Paolo extremely proud. The quality of both films was so good, he said, that he jumped on the opportunity when these were offered to him.

"Well, sabi ko nga ‘yong Resiklo I think is considered the biggest film ever made in terms of effects [which is] world-class, sound. So para sa ‘kin Resiklo is a good film, napanood ko na, ang ganda," he said proudly.

The same goes for Banal. "I think, if I'm not mistaken, the only digital film na pumasok [in the MMFF]. Hindi siya ganu'n kalaki pero nakapasok kami, sa kabutihang palad," he smiled with obvious relief.

Despite Banal's shoestring budget—which is a true mark of an independent film—this did not hinder its director, GMA News and Public Affairs reporter, Cesar Apolinario, and producer Ina Alegre to come up with a quality film worthy of an international audience.

A GOOD YEAR. As the year draws to a close, Paolo gratefully reflects on all the blessings he received in 2007.

"It's a great year [2007]," he smiled. "There was never a week na I rested. I did two movies, a total of three shows, magandang-maganda ang taon. Sana mas maganda itong darating na taon."

But while many of his peers have been bumming around during the Holidays, Paolo's personal schedule remains tight and busy until the end of the year. He left the country a few days after Christmas to visit Singapore where he stayed for two days, December 29 and 30. He's back in Manila for the New Year celebration.

"I'm spending [the] New Year here with my family and at the same time do promo formy movies," he shared.

New Year according to Paolo is a family affair, complete with dazzling and noisy fireworks.

For 2008, Paolo vows that his passion as an actor will keep burning.

"Work should continue sana for 2008," he wished. "If you'll ask me about my resolution, it's more of a promise na hindi ako magbago sa ginawa ko for 2007. I think I did a good job ng 2007, professionally and personally. So sana lang hindi ako magsawa na maging tuloy-tuloy ‘yong fire na gusto kong umarte."