Sunshine Cruz on reported marital issues: "Pls bear with me if I choose not to talk." 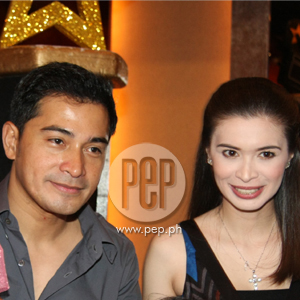 Cesar and Sunshine's photo during the second birthday of their daughter Angel Francesca last December 1. The couple celebrated their seventh anniversary last September 14.

Cesar Montano and Sunshine Cruz were a picture of marital bliss during the second birthday of their daughter, Angel Francesca, at the Le Salon ballroom of Hyatt Hotel and Casino in Manila, last December 1.

On Christmas day, the couple reportedly had a heated argument over Cesar's alleged affair with 16-year-old half-Filipina, half-Brazilian model Mariana del Rio. Reports claimed that Sunshine, along with their three daughters, left their Quezon City home.

Sunshine has been keeping mum about the "separation" rumors. Even in the statement she sent to Maglipon today, December 30, at 4:16 p.m., the 30-year-old actress did not mention anything about the real deal of her marriage to Cesar.

She simply said: "Pls bear with me if I choose not to talk. I have 3 little angels na kailangang pag-ingatan sa lahat ng ito. Please pray that everything will be ok in the long run. Thanks for all the support and concern you have been giving my family. Im still hoping and praying for the best. Thanks for your undestanding. God bless."

This is the second "separation" issue that the couple faced this year. The first erupted last June. The trigger, according to some sources, was when Buboy went to a girlie bar AirForce1 in Parañaque.