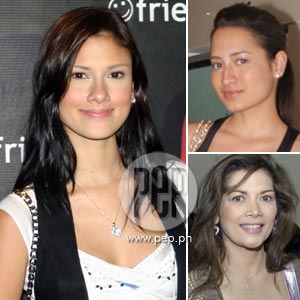 "I think it's old news na," remarked Bianca King when asked about tension with former actress Jean Saburit, mother of her best friend Nicole Anderson. Jean apparently accused Bianca as a bad influence on her daughter.

Bianca further said that she was actually not directly involved with the issue between Nicole and Jean. In fact, the young actress wanted to forget about it.

Jean's claim has really affected the 22-year-old actress to the point that her parents went out publicly and defended their daughter .

To prove that she would never be one to influence others negatively, Bianca described herself as a daughter.

AT HER EXPENSE. Bianca said that she just tries to understand Jean's accusation.

From her understanding, the young actress explained, "Naiintindihan ko kung bakit siguro kailangang ibalita yun kasi kilala yung pangalan ko. Parang all of this, all of the publicity na nangyayari para sa ibang tao was at my expense.

"But it's okay, I don't have any hard feeling to anyone. Nicole is still my friend and I will always defend her, she will still always defend me, and away na nila yung mag-ina, kaya let's leave it at that."

On the other hand, Bianca does not plan to ask for an apology from Jean. She reiterated that she just wants to forget the issue and move on.

Bianca further said, "Parang let's not make it seem like ganung ka-grave siya ‘cause it's really not. Next week, people are going to forget about it."

STILL FRIENDS. Meanwhile, the young actress was grateful to Nicole, who defended Bianca during her guest appearance in Showbiz Central last Sunday, January 20.

She also clarified that despite the rift with the mother of her friend, Bianca still communicates with Nicole. She narrated, "Nicole and I are always in constant communication but humihingi lang ako ng update sa kanya once in a while about, you know, ‘What's happening? Are you guys okay?' Pero as far as that na lang."

FOCUSED. With her plea to let the issue pass, Bianca said that she would just focus on her career and her studies. Bianca is currently a sophomore film student at the De La Salle University College of Saint Benilde.

"At saka alam ko po yung purpose ko dito, which is to set an example to the youth. That's why I'm a working student.