Are Jennylyn Mercado and Patrick Garcia headed for splitsville? 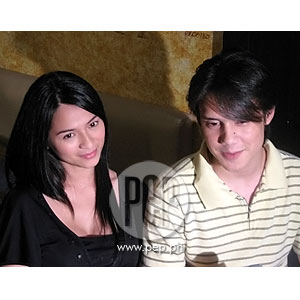 Trying her best to put up a brave face in the absence of her boyfriend and father of her coming baby, young actress Jennylyn Mercado nervously said: "Siguro kailangan kong maging matapang for my baby." She added painfully, "Kahit wala siya."

Parents-to-be Jennylyn Mercado and Patrick Garcia are beginning to feel the weight of responsibility on their young shoulders. As a result, disagreements between the two are said to be frequent.

"Well, we encounter some problems," admitted Patrick in an interview with The Buzz aired last February 3. But Patrick was quick to add, "We're still together."

When Jennylyn announced her pregnancy, many admired Patrick for owing up and taking the news like a real man. But the rumors that followed Jen's admission seem to paint a different picture of the 26-year-old actor.

"May mga disagreements, may mga konting quarrels kami pero pinaninindigan ko pa rin ‘yong mga sinabi ko," stressed Patrick. Admittedly, and despite trying his best to put up a brave face, the demands and the thoughts of fatherhood obviously unnerve him. Part of that early adjustment has been the need to broaden his patience and accommodate Jen's petty whims and moods.

"I still have to adjust to the responsibilities I have to take on, I'm only human. Basta ina-admit ko naman ako 'yong mali, you know, she's pregnant I should understand the situation."

Patrick also denies playing hide-and-seek with Jen. According to the rumor, the younger brother of Cheska Garcia is playing hard to get and fails miserably in his expected role as a supportive boyfriend and father-to-be.

"Hindi ko siya pinagtataguan," Patrick stated firmly. "I call her, every now and then."

Looking gaunt and weary, Jen revealed that all of her efforts to at least gain weight for the sake of their baby and herself were all in vain.

Part of Jen's dilemma, as revealed during the interview, was Patrick's increasingly marked absence during these trying times. Deflecting Patrick's assurance to The Buzz, Jen bluntly confessed that communication between them has been scarce and dangerously waning for the past couple of weeks.

Currently on her third month of pregnancy, the StarStruck alumna argued that she never fails to initiate the first move—often cajoling Patrick, reminding him of his responsibilities especially to their baby.

Slighted by Patrick's apparent snub, Jen said that at this point, any form of assurance and effort—no matter how small—coming from Patrick would be enough.

Jen insisted that she herself is clueless about whatever triggered Patrick's coldness towards her.

Unable to control her tears, Jen expressed her desire to talk to Patrick and clear up whatever doubt and uncertainty clouds their relationship.