Regine Velasquez keeps mum about her rumored transfer to ABS-CBN 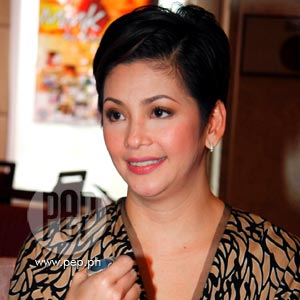 In the "Constellation of Stars" segment of SOP this afternoon, February 17, Regine Velasquez and the rest of the show's main hosts sang songs about goodbyes and friendship. This prompted the people to ask if the Asia's Songbird is really moving out from GMA-7.

For weeks now, news about Regine Velasquez's alleged transfer to ABS-CBN has been the talk in and out of showbizlandia.

At first, Regine's boyfriend, Ogie Alcasid, denied this report in his interview with PEP (Philippine Entertainment Portal) during the audition of Pinoy Idol in Iloilo last February 2. A few days later, Ogie was interviewed again by PEP and when asked again about Regine's alleged transfer to the Kapamilya network from GMA-7, he was singing a different tune already. That time, he wasn't sure anymore, telling PEP that he was not the best person to ask.

Yesterday, February 16, ABS-CBN tendered a special presscon for Regine. No, it was not the announcement of Regine's transfer to ABS-CBN. The presscon was for her second appearance on Maalaala Mo Kaya, the drama anthology of the Kapamilya network, which will be aired on February 22.

It can be recalled that Regine's first appearance on Maalaala Mo Kaya in 2002 with Piolo Pascual in an episode titled "Lobo," won for her a Best Actress trophy from Star Awards for TV. Piolo was also Regine's leading in her first movie with Star Cinema, Paano Kita Iibigin.

In the said presscon, Regine, as expected, was asked about her rumored transfer. The Asia's Songbird neither confirmed nor denied the rumor, although she admitted that she has an offer from ABS-CBN but she has not yet decided on it.

Regine also said that she is happy where she is now. But then, she admitted, "as an artist, minsan you want to experience something else. You want growth, you want to be challenged..."

Earlier this afternoon, February 17, in the "Constellation of Stars" segment of SOP, which Regine co-hosts, the regular performers of the show sang songs talking about goodbyes and friendship. It was also evident that the main hosts—Regine, Jaya, Janno Gibbs, and Ogie Alcasid—were very emotional while singing these songs. And at some point, they tried controlling their tears to no avail, especially Regine.

In her solo number later on the show, Regine sang Whitney Houston's "Try It On My Own," which has lyrics that go, in part: "I'm not afraid to try it on my own / I don't care if I'm right or wrong / I live my life the way I feel / No matter what, I'm gonna keep it real / It's time for me to do it on my own."

After watching these scenes and hearing the meaning of the songs, many are baffled and asking: Why was Regine crying? Is it true that she is moving to ABS-CBN?

People expected Regine to answer these questions before the end of SOP. But it never happened. Regine and the rest of the hosts did not talk about it and the show ended on a happy note, with all the SOP performers singing an upbeat song.

After the show, a reporter asked Regine if she is really moving out from GMA-7. But the Asia's Songbird said that she is not yet ready to talk about it.

But according to an insider, Asia's Songbird is more likely to accept the offer from ABS-CBN. Regine could not possibly turn it down because she was told that "sky is the limit."

The multi-million peso deal, according to another source, includes Regine's own choice of show, movies for Star Cinema, and guaranteed exposure via The Filipino Channel (TFC), ABS-CBN's international channel.

Regine will have a series of concerts in Europe this year to be sponsored by TFC. This means that the singer-actress has to promote these shows on different ABS-CBN programs.

Another source, who requested anonymity, told PEP that Regine will be given a self-titled musical variety show and the title role in the Filipino version of the hit TV series Betty La Fea.

But GMA-7 is reportedly not giving up on Regine. According to some insiders from the Kapuso network, GMA-7 executives are pulling all strings to persuade the Asia's Songbird to stay.

Regine has been with GMA-7 for the longest time. Aside from SOP, she hosted Search For A Star, which later became Pinoy Pop Superstar, and Celebrity Duets with boyfriend Ogie Alcasid. She also starred in a soap opera titled Forever in My Heart opposite Richard Gomez and Ariel Rivera.

The singer-actress also did a movie for GMA-7's film arm, GMA Films, in co-production with Viva Films—Till I Met You, which served as her second team-up with action superstar Robin Padilla after Kailangan Ko'y Ikaw.

Before the news came out that Regine will transfer to ABS-CBN, she is scheduled to do a movie with Ogie for GMA Films with a working title Love Is Blind...And Deaf. Regine and Ogie were also supposed to co-host the second season of Celebrity Duets, which will begin right after Pinoy Idol.

But with this new development in Regine's career, there's a possibility that she won't be doing these projects for GMA-7 anymore.