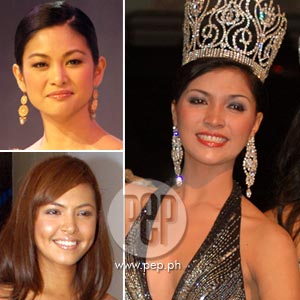 Two former beauty queens—1993 Miss World Second Princess Ruffa Gutierrez and 1979 Miss International Melanie Marquez—have already given their opinion and their advice to Janina. Even 1994 Binibining Pilipinas-Universe Charlene Gonzalez, who was also one of the hosts during the coronation night last Saturday, March 9, thought that Janina just had the jitters.

In an article in People's Journal today, March 13, Charlene said, "I think ninerbiyos lang siya. Kasi, I talked to her later at okay naman ang English niya. It's the first time for her to join a contest, so understandable that she's so tense. But she'll do okay kasi they'll still be trained naman."

MIRIAM'S ADVICE. Just like Charlene, 1999 Bb. Pilipinas-Universe Miriam Quiambao also believes that Janina could still do well in the 58th Miss World beauty pageant to be held in October if she gets proper training.

In an interview with PEP (Philippine Entertainment Portal) yesterday, March 12, during the opening ceremony of The Spa at the Bonifacio High Street in The Fort, Taguig City, Miriam said that Janina should be given a chance to prove herself.

She said, "I feel for her. You know, she's only 17 [years old], quite young and the personality is not yet molded. You know, we have to give her a break somehow."

Miriam then mentioned about the training that Janina will have to go through.

"Miss World is in several months time. She will have to go through training. For sure, question and answer will be one of them. Perhaps with enough training, she will gather enough confidence. Trust that she will do her best when she eventually competes for the pageant.

"Mataas naman yung score niya sa bathing suit at saka sa gown niya. She's a very young pretty woman maybe she just needs to be developed. And for sure, she will have enough confidence when the pageant comes," said the 1999 Miss Universe 1st Runner-up.

MARGARET'S OPINION. This is also the opinion of Janina's predecessor, Bb. Pilipinas-World 2007 Margaret Wilson. During the demonstration of the new products of The Face Shop at the Cav Wine Bar and Restaurant at the Bonifacio High Street in The Fort, Taguig City, yesterday, she said that other former beauty queens will surely help Janina improve her speech for the upcoming Miss World pageant.

She told PEP, "I'm sure like all the past beauty queens, we'll take care of her and our sponsor Dale Carnegie [Training] for speech improvement will [help] her, you know. Even if she's pressured, you know, a beauty queen is always great under pressure. I took classes with Dale Carnegie and they really helped me become more confident in the way I talk and more confident in front of a lot of people and hopefully it could also help Janina.

Margaret also expressed what she felt about Janina and the ridicule she has been receiving since Saturday.

"I really don't think that it's an excuse that, you know, she answered that way," she said.

However, like the other beauty queens mentioned earlier, Margaret asked the people to understand Janina.

Margaret said, "I have nothing against the girl because I understand how hard it is to answer a question in front of a thousand people and, you know, all that pressure. I mean, it's really, really difficult.

"I don't really know Janina personally, I have not really talked to her, but I understand if she rattled on it a bit. I'm sure she's a smart girl. I'm sure she was just really, really, nervous."

BEAUTY AND BRAINS. In an another interview, former Bb. Pilipinas-World Ruffa Gutierrez said, "But always remember, beauty with a purpose and beauty with brains." Miriam and Margaret also agree that joining a pageant does not only require beauty, aspirants should also have brains because they represent the country abroad.

In Margaret's opinion, "Personally, I think what you have in between your ears is still more important than your face. Even if you have a pretty face and there's nothing up there, it's not really gonna take you anywhere. If you can't be able to converse with other people, then how are you gonna get by?"

"For a woman to represent our country abroad, I also believe that brain is very important. At this day and age, a lot of women are not only beautiful but they're also smart as well. And with age comes maturity, also smartness with proper education. I don't think anybody is stupid, probably they just lack enough education that is required for whatever is required for a particular position. But with enough training and education, I think everybody will be just as smart."

JANINA'S DEFENSE. On her part, Janina is handling all the ridicule and criticisms very well.

Janina also admitted that she got nervous during the question-and-answer portion and she did not clearly hear the question from judge Vivienne Tan.

If she were asked again about the role of Janina's family in her joining the Bb. Pilipinas, this will be her answer: "Well, they serve as my inspiration. Talagang yun po talaga."