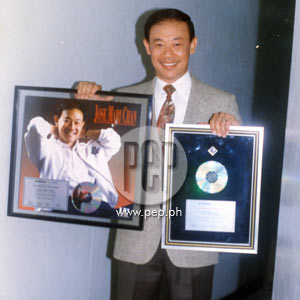 Entrepreneur Jose Mari Chan is more of a songwriter at heart. Known for his romantic ballads, Jose Mari wrote some of the most memorable OPM tunes. His album Constant Change released in 1989 raked in sales and accolades. The album was bestowed the prestigious Diamond Record award for its impressive sales, which extended to neighboring countries.
Last time, PEP [Philippine Entertainment Portal] presented Part 1 of some of the best Filipino song composers in recent memory. The names included in this list are those who made an impact on mainstream music through a succession of hit songs—songs that left a mark, not just in the charts but in the hearts of the Filipino listeners as well.

Aside from the hits and their lasting impact, this list also comprises artists, who, one way or the other, revolutionized the OPM landscape through their creativity and Filipino sensibility.

VEHNEE SATURNO. Like most artists, Vehnee Saturno was discouraged by his mother from pursuing music as a career; dreading the stereotyped perception that sex, drugs and rock n' roll go together.

But Vehnee went against his mother's wish and courageously dropped his job as a collector and meter reader in 1980 to follow his heart. Painstakingly honing his chops, Vehnee emerged victorious in a songwriting contest in 1982. Immediately after collecting his reward, the budding songwriter went home to personally hand the trophy and cash money to his mother.

Vehnee's first commercial hit was the powerful ballad "Be My Lady," interpreted by a young crooner named Martin Nievera. The song served as a breakthrough for both Martin and Vehnee.

There was no looking back since. Some of the most memorable tunes written by Vehnee include "Nag-iisang Ikaw," "Sana Kahit Minsan," "Mula Sa Puso," "Simple Lang," "Dahil Tanging Ikaw," "Kaba," "Till My Heartaches End," "Forever's Not Enough," among many others.

REY VALERA. After being part of a band named Electric Hair for seven years, Rey Valera decided to take on a solo route as a songwriter. It was all guts, heart, and ear for the Meycauayan, Bulacan native, as he didn't have any formal musical training to back him up.

Valera's first official hit was the song "Ako Si Superman," which he originally wrote for crooner Rico J. Puno. The song fell into his own lap, however, when a Vicor Records executive asked the fledgling songwriter to cut it himself in 1977. His career would ultimately take on that pattern—writing songs for others as well as for himself.

Some of the songs authored by Rey were "Sorry Na, Puwede Ba," "Daigdig Ng Ala-ala," "Pangako" and Ayoko Na Sa ‘Yo," to name a few.

But one lasting achievement of Valera was writing songs for Sharon Cuneta. In fact, it was Rey who penned Sharon's first major hit when the latter was still an unknown 12-year-old. When he was given the task, Rey admitted feeling uncertain since he felt Sharon was way too young to render a serious tune, yet he didn't want to craft something in the mold of a nursery rhyme.

Riding inside a jeepney, Rey crafted the song "Mr. DJ" and in the process, catapulted Sharon's young career to the top. Rey followed it up with "Kahit Maputi Na Ang Buhok Ko." The friendship between the two stood the test of time; when Sharon separated from husband Gabby Concepcion, Rey wrote the song "Kahit Wala Ka Na" as a battle cry for his good friend.

A man with many musical talents, Rey also gained popularity writing movie theme songs such as "Pangako Sa ‘Yo" and "Sinasamba Kita" among others. Aside from these titles, Rey also popularized the songs "Kung Tayo'y Magkakalayo," "Malayo Pa Ang Umaga," "Kung Kailangan Mo Ako" and "Maging Sino Ka Man"—a song he wrote for women who work in nightclubs and bars.

JOSE MARI CHAN. Born in Iloilo on March 11, 1945, Jose Mari Chan attended college at the Ateneo de Manila University where he graduated in 1967 with a degree in economics.

A businessman who is a songwriter at heart, Jose Mari experienced his first hit also in 1967 when he released his first single titled "Afterglow." A prolific songwriter, Jose Mari wrote movie theme songs from 1970 to 1974. He eventually stayed in the United States for 10 years and he continued to write songs for local artists and even for foreign artists.

Returning home after a long hiatus, Jose Mari struck gold with the release of his album titled Constant Change in 1989. The album proved to be a solid effort, showcasing Chan's flair and maturity as a romantic songwriter.

The album contains the songs "Constant Change," "Sing Me Your Song Again, Daddy," "Can't We Start Over Again," "Please Be Careful With My Heart," and the smash hit "Beautiful Girl."

Constant Change achieved the distinguished Diamond Record award because of its phenomenal sales. The album also did extremely well in neighboring countries, such as Malaysia and Indonesia. In 1990, he dished out a Christmas album titled Christmas In Our Hearts, which went on to notch triple platinum status.

Although some criticize his songs as too schmaltzy, there's no denying that Jose Mari's ability to weave sweet words with lush melodies are simply perfect for the Pinoy romantic sensibility.

Other songs written by the artist-entrepreneur that have withstood the test of time are "Can We Just Stop and Talk Awhile," "Tell Me Your Name" and "Is She Thinking About Me."

ELY BUENDIA. As frontman for the '90s legendary band, the Eraserheads, Ely Buendia wrote songs that represent the spirit and restlessness of a new generation of Pinoy listeners. Mixing wit, street-smart lyrics with innate pop sensibilities, Buendia successfully captured the plight of the ‘90s kids through songs that spoke of campus life, young love, adolescent yearnings, friendship, and the uncertainty of growing up.

Often referred to as the local counterpart of John Lennon, Buendia's songs like "Ligaya," "Pare Ko," "Alapaap," "Magasin," "Torpedo," "Huling El Bimbo" and "Kaliwete," to name only a few, shaped OPM landscape and caught the fancy of the majority, which made Ely and the rest of the Eraserheads certified household names. The band also ushered in a new era for OPM as they kicked the door wide open for local bands to be accepted in the mainstream.

MIKE HANOPOL. Mike Hanopol was first introduced to the public as a member of the iconic ‘70s rock band named Juan dela Cruz. They say that each decade is reflected through the prevailing music of its time. Mike's songs with Juan dela Cruz mirror the decadence of the era without sounding stiff. Armed with the most memorable riffs in the history of OPM, Mike wrote "Balong Malalim," "Kahit Anong Mangyari," "Kagatan," "Laki Sa Layaw" and a number of local rock gems.

But unknown to most people, Mike was also the lyricist behind Hagibis, the act inspired by Village People. Unleashing his naughty and playful streak, Mike wrote most of the group's identifiable songs such as "Legs" and "No Touch."

YOYOY VILLAME. Before Lito Camo made songs about spaghetti and the number eight, there was only the undisputed King of Philippine Novelty Songs—Yoyoy Villame.

Although some might question Yoyoy's market as an artist, one cannot overlook the fact that the former bus driver possessed a sharp wit and an uncanny gift for word play. Although his songs—delivered in Visayan, Tagalog and English—were written to make the listeners laugh, there's an underlying element of politics and personal views in Yoyoy's songs.

Some of Yoyoy's most enduring songs are "Butse Kik," "Philippine Geography," and "Mag-exercise Tayo Tuwing Umaga."

Yoyoy's influence extends even to this day as proven by the popularity and appeal of novelty songs and even with the emergence of gag bands churning out hilarious songs.

ASIN. The quartet of Cesar "Saro" Bañares, Lolita Carbon, Mike Pillora and Pendong Aban—collectively known as ASIN—introduced the use of indigenous instruments into local pop and rock music.

Like other folk artists, ASIN wrote songs about nature, environment, their hometown Mindanao and the plight of the working class. The group often used the kulintang to keep the indigenous feel intact. Some of ASIN's most beloved tunes include "Masdan Mo Ang Kapaligiran," "Ang Bayan Kong Sinilangan," "Pagbabalik," and "Balita."

JOEY DE LEON. There's definitely more to Joey de Leon than a noontime show and comedy films. Although not officially listed as part of the musical group VST & Co. Joey was responsible for composing some of the band's most enduring hits, like "Ipagpatawad Mo," "Awitin Mo, Isasayaw Ko" and "Boyfriend Kong Baduy."

He is also touted as one of the originators of spoof songs, whether OPM or foreign—a ploy that would later on be used by Michael V to boost his career. Joey's brilliance when it comes to improvising song lyrics was documented in the popular 12 volume TVJ Tough Hits collection.

OGIE ALCASID. Ogie Alcasid once said that he wants to be recognized more as a songwriter than a singer. Over the years, Ogie steadily beefed up his credentials as a songwriter and he proved that he is indeed molded for the part. A self-confessed fan of heart-wrenching tunes, Ogie penned a bulk of modern ballads such as "Bakit Ngayon Ka Lang," "Nandito Ako," "Sa Kanya," "Hanggang Ngayon," "Pangarap Ko Ang Ibigin Ka," "Kailangan Kita," "Pangako," "Kung Mawawala Ka" and "Kailangan Kita."

Talking about songwriting, Ogie once told YES!: "This is really what I do... I think the most exciting part of my career now, kasi I've done from TV to movie to recording, now I think I'm being recognized as a songwriter. And I really, really, really love that because that's who I am."

According to Ogie, nothing beats the feeling of being asked by an artist to write a song for him or her. "I'm getting calls to write songs for other people," he enthused. Like for Pops (Fernandez), I wrote two songs for her. She called me. Sabi niya, ‘Can you write me a song?' Challenge e."

Some of the many artists who tapped the services of Ogie the songwriter include Piolo Pascual, Ogie's lady love Regine Velasquez, and Sharon Cuneta.