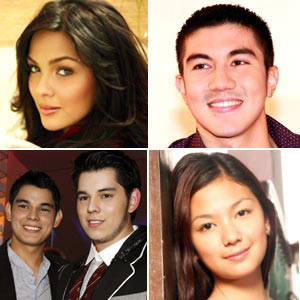 (From left, clockwise) KC Concepcion, Luis Manzano, Jennica Garcia, and the Gutierrez twins Richard and Raymond are some of the young stars who are considered showbiz royalty.

They have showbiz blood running in their veins. With a surname that is familiar to most showbiz denizens, these young stars have celebrity parents who are more than willing to show them the ropes.


These showbiz kids are the products of a gene pool that boasts of talent, charm and mass appeal. Their refreshing aura coupled with their innate acting ability make for a winning combination that allows them to penetrate the highly competitive world of show business.

Feast your eyes and ears on this new generation of stars who are expected to become the pillars of tomorrow's entertainment industry.

PEP's list is limited to children aged 30 years old and below and those whose parents (and even grandparents) are known in showbiz circles.

Here are the top showbiz kids (in alphabetical order):

Blessed with the showbiz genes she got from celebrity parents Sharon Cuneta and Gabby Concepcion, KC Concepcion is turning out to be one of the most recognizable progenies in the entertainment scene. She is admired not only for her acting talent (honed by her theater background) but also for her humanitarian efforts. She is the National Ambassador against Hunger of the World Food Program of the United Nations and is actively involved in the Virlanie Foundation, a group for underprivileged children.

TV host/actor-comedian Keempee de Leon is seen daily in the noontime show Eat Bulaga! alongside his father Joey de Leon. Although Keempee's list of credits is nowhere near his father's jampacked schedule (aside from Eat Bulaga!, Joey is seen in Mel and Joey, Takeshi's Castle and Startalk), he hosts Kung Ako Ikaw, a reality comedy television show in the Philippines that airs three times a week on GMA-7. His mother Daria Ramirez is a character actress who was last seen in the indie film Batanes (2007).

Mark Anthony Fernandez, Rudy Fernandez's son with former actress Alma Moreno, has been in showbiz since he was 13 years old. Back then, he was part of the trio "Guwapings" along with Jomari Yllana and Eric Fructuoso. The group has been dissolved but he never ran out of projects from ABS-CBN. But in 2007, he switched networks and became part of Impostora and Kamandag. Now that he is an exclusive GMA-7 star, we can expect this 27-year old actor to shine even more in a field where his father is touted as one of the most enduring stars of his generation.

With a face as sweet as her mother Jean Garcia's and bearing the same confidence as her father, former matinee idol Jigo Garcia, Jennica Garcia made her presence felt in showbiz with her sudden appearance in TV shows and movies. She became known as Mart Escudero's onscreen partner in the GMA-7 show Boys Nxt Door and the Regal Entertainment horror flick Hide and Seek (2007). She reportedly has three projects in the pipeline: Now and Forever, Ultraelectromagnetic Love, and Ang Nanay Kong Aswang.

Twin brothers Richard and Raymond Gutierrez, both 24 years old, are the sons of ‘60s matinee idol Eddie Gutierrez and talent manager Annabelle Rama. Now, Richard is taking up the same route as his father by being one of the most sought-after leading men of his generation. His movies shown on Valentine's Day are blockbuster hits and his primetime shows are among the top-rating shows of GMA-7. Meanwhile, Raymond is making a name for himself by hosting various shows such as Showbiz Central and Pinoy Idol.


She can rap just as well as her father Francis Magalona but Maxene Magalona is content being in the limelight as a versatile actress. Her mother is Pia Arroyo while her grandparents were movie greats, the late Pancho Magalona and Tita Duran. Maxene showed her comedic skills in the GMA-7 sitcom Daddy di do du and is now one of the leading ladies of Richard Gutierrez in Kamandag.

Formerly known by the public as Vilma Santos's beloved son Lucky, Luis Manzano is growing up to be a young man who is as quick witted and funny as his father Edu Manzano. Luis is following in his father's footsteps down the TV host-actor trail and has even added being a MYX VJ to his impressive resumé. Luis has been hosting Pinoy Big Brother Teen Edition Plus and he recently starred opposite KC Concepcion for her anthology show I Am KC.

Singer-actress Lovi Poe is the offspring of Fernando Poe Jr. and Rowena Moran, Da King's leading lady in a San Miguel Beer commercial. Lourdes Virginia (Lovi's real name) wanted to be known as the singer Lovi to create her own identity apart from her famous father. But eventually she decided to use Lovi Poe as her screen name after she crossed over from the recording scene to the world of showbiz. She is now part of GMA-7's Sine Novela Kaputol ng Isang Awit.

Dolphy sired 18 children with five different women but for this Top List, one of them made the cut for being the most recognizable and being below 30 years old. The Comedy King and actress-politician Alma Moreno sired a son whom they named Vandolph. He became a child star during his Ang TV days and was part of the ABS-CBN sitcom Home Along da Riles and the sketch comedy show Quizon Avenue. He is part of the action-adventure series Palos.

The charismatic Vic Sotto and his first wife Dina Bonnevie are the parents of Oyo Boy Sotto, who now prefers to be called Oyo. He used to appear in GMA-7 shows such as Majika but he transferred to rival network ABS-CBN and became part of the fantaserye Pedro Penduko at ang mga Engkantao. The 24-year old actor is part of the drama series Prinsesa ng Banyera, where he works with the actress Kristine Hermosa who is being linked to him. His father Vic has been named the Philippine Box Office King for three years in a row (2004, 2005, and 2006). All this time, Oyo was part of the blockbuster hit Enteng Kabisote.

Other young stars who come from an illustrious family line and are showing promise in the entertainment industry are Jolo and Brian Revilla, Gabriel Valenciano, Jeremy Marquez, and the Eigenmann siblings (Ryan, Geoff and AJ). Choose other own well known showbiz kids by leaving a comment in the space below.