Love at first watch: The magic of “Dear Heart” revisited 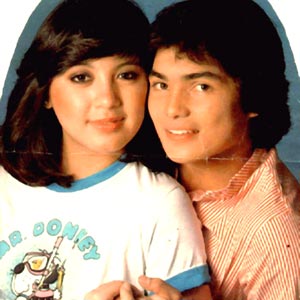 It was the film that started it all for Sharon Cuneta and Gabby Concepcion. "Direk Danny [Zialcita] wanted my character in the movie to be close to my real self para daw hindi ako mahirapan," confided Sharon to entertainment columnist-host Ricky Lo when asked about her first film Dear Heart in 1981. As for her leading man, Sharon bluntly confessed that, at first, "Anybody but Gabby Concepcion. I found out na mabait naman pala siya w

After Sharon was given a recording contract at the age of 12, singer-composer Rey Valera remembers feeling perplexed when he was commissioned to write a song for the young singer. A straight-ahead love song, according to Valera, didn't seem fit for someone so young.

But Rey wouldn't allow himself either to write anything like a nursery tune. He toiled for a few days. And then, while riding a jeepney he suddenly came up with a song he'd call "Mr. DJ." Valera instinctively knew that he unearthed a gold mine. "Mr. DJ" did become a major hit and the young Sharon Cuneta became a singing sensation.

Sharon charmed her way into the OPM charts and into the hearts of Filipino listeners. Two years after her breakthrough as a recording artist, she was being eyed by some producers to star in a movie.

ANYBODY BUT GABBY. The theme of Sharon's first film, at only 15, was a no brainer—young love with the usual Romeo-and-Juliet elements, minus Shakespeare's tragic touch.

Contrary to popular notion, Sharon's first movie was not produced by Viva Films but by a production outfit known as Sining Silangan. Director Danny Zialcita was tapped to direct the film; part of his job was also to convince the Cuneta household to allow Sharon to jump into acting.

"I was a singer when this movie was offered to me," said Sharon in an interview with QTV 11's Ang Pinaka...

Almers De Luna, a proud member of the group Sharon's Angels, revealed that the Cunetas asked for a P220,000-talent fee, which at the time was a staggering amount for a newcomer. To the disbelief of Sharon's parents, Sining Silangan agreed to pay the sum without reservation.

"Direk Danny said to my mom, and I will never forget this until the day I die, if the mayor [Sharon's dad, Pablo Cuneta] and you do not allow Sharon to do this I will never make this movie. I will shelve this forever," Sharon fondly recalled. "So it was really me."

Sharon was the only choice for the heroine but the leading man was a different story. She did not like Gabby.

With a laugh, Sharon confessed, "Anybody but Gabby Concepcion." The reason: "I just think he's a bit suplado... wala, nayayabangan ako."

The original choices, as Sharon recommended to the producers, were Alfie Anido, Jimi Melendez and Albert Martinez—for whom Sharon had a crush at the time. But all three, as fate would have it, were unavailable.

Sharon's disdain for Gabby stemmed from his mestizo good looks, which as Sharon mentioned, made him come across as an arrogant snob.

BIRTH OF A LOVE TEAM. Personal impression aside, Sharon and Gabby's screen tandem proved to be a winning combination at the tills.

The film Dear Heart tells the story of April (Sharon), a well-off, sweet and smart daughter of a strict man named Don Manolo (Eddie Garcia). April's submissive character, particularly towards her dad, was put to a test when she met and eventually fell in love with Jimmy (Gabby).

Dear Heart made a killing in terms of blockbuster revenues. But more than the astronomical figures, the film significantly paved the way for the Sharon-Gabby love team mania that swept the ‘80s.

FALLING IN LOVE. While Sharon had an unfavorable impression of her leading man, the great chemistry shown by the two onscreen was the exact opposite.

"It was strictly work and we only talked when we were in front of the camera," shared Sharon to Remy Umerez of the now defunct Filipino Star Magazine in 1981—the same year that Dear Heart was shown in theaters.

The first few scenes of the film were taken in Baguio and both lead stars had yet to know each another. All of that changed when the shoot moved to Manila.

"April 5 to be exact," recalled Sharon. "We attended this rally at Plaza Miranda and since we could not watch the proceedings of the program because there were so many people, we went to the rooftop and we sat down and talked. We talked about our likes and dislikes, the intrigues in the movies, our zodiac signs and other things that came into our head."

As shooting for Dear Heart went on, the suplado impression Sharon had of her leading man gradually melted.

Sharon animatedly described Gabby at the time, "He has this mannerism of making facial expressions that would make me laugh. I burst into laughter because he tried so hard. But he's so cute. I told him that and he became cuter. He would do this often, lalo na kapag I am lonely. He would do anything to cheer me up."

She even defended Gabby against people who saw him in the negative light she used to harbor.

"Because they don't know him that well," she argued, singing a different tune. "He gives out an impression that he is aloof at parang ilang. He is also shy. But once he opens up, you'll find out how nice and friendly Gabby is."

The interview was conducted after the film had been shown. When Remy Umerez of Filipino Star probed whether they were still in touch, Sharon replied, "Of course. He calls up the house often and we talk for hours over the phone. He also visits me when he has the time."

The screen romance eventually turned real. On September 23, 1984, Sharon and Gabby tied the knot at the Manila Cathedral, with no less than then- president Ferdinand Marcos as one of the sponsors. Out of the marriage was born daughter Maria Kristina Cassandra Concepcion, now popularly known as KC Concepcion.

Unfortunately, the union did not last.

"LOVE STORY OF OUR TIME." Although the story of Dear Heart was very simple, and at worst, formulaic, the movie struck a chord with the Filipino audience. The innocence of the two main young characters, the clandestine meeting, late night phone calls and the rebellion brought by young love—moviegoers experienced all these in one way or the other during their younger years.

De Luna explained that the movie had enough gloss and mass appeal to cross barriers of the social spectrum.

GMA Films Program Development Manager and Head of Synergy Noel Ferrer hailed Dear Heart as a landmark film: "It was the love story of our time."

Sharon, now 42, openly expresses her qualms over the idea of remaking Dear Heart on TV or on the big screen. Most local film enthusiasts, not just the Sharonians, agree with the Megastar. Director Derramas said that Dear Heart is one those rare movies that seem to be crafted for and portrayed solely by a particular actor; in this case, by Sharon and Gabby.

Even Sharon's daughter KC Concepcion would not dare touch the film if ever it's offered to her. "Sharon Cuneta and Gabby Concepcion po ‘yong movie na ‘yon," she told PEP (Philippine Entertainment Portal) in a recent interview. "Sila po talaga ‘yon."

Sharon Cuneta and Gabby Concepcion have certainly come a long way since their first movie team-up in 1981. They progressed and did other movies, together and separately, that were more impressive and momentous. But, for all their other projects and personal achievements they reaped as actors, Sharon Cuneta and Gabby Concepcion will always be identified with the 1981 teenybopper film that became part of Pinoy pop culture.

"That just might be still the best movie of my career," an emotional Sharon reflected a couple of years later. Referring to her movie career, and perhaps even to her personal life, Sharon pensively added, "I can't believe that's the movie that started it all."