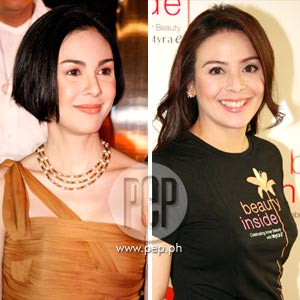 According to reports, Dawn Zulueta took note of Gretchen Barretto's "diva" attitude during a studio pictorial for a popular shampoo brand in late 2006. Irked by what she saw, Dawn reportedly lashed out at Gretchen through text messaging. What followed next was a verbal war between two of the most beautiful faces in local show business.

The recent controversy surrounding the showbiz press walkout last Monday, April 28, during the launching of Pantene's newest endorsers,—Ruffa Gutierrez, Gretchen Barretto, Judy Ann Santos and Claudine Barretto—at the poolside of the Intercontinental Manila, put the popular shampoo brand and its image models under the spotlight again. The event was part of Pantene's second "Most Beautiful" campaign.

GETTING INTO EACH OTHER'S HAIR. Back in 2006, during the first "Most Beautiful" campaign, a "prima donna" issue flared up between Dawn Zulueta and Gretchen Barretto. The incident reportedly took place during a studio pictorial involving the two big stars. Both Dawn and Gretchen, along with Angel Aquino and Ruffa Gutierrez, were tapped by the shampoo brand as its endorsers .

According to witnesses during the shoot, Gretchen arrived at the studio with a group of alalays (personal aides), five bodyguards and three yayas (child carers). The controversial actress also brought several imported beauty products.

After settling in one corner, Gretchen allegedly instructed her bodyguards to open her two Louis Vuitton leather bags, revealing an array of expensive cosmetics. The bodyguards then proceeded to fix the makeup cache stands.

When Gretchen saw the pair of shoes that she was supposed to use for the shoot, she volunteered instead to wear her own shoes, which were stacked inside her Louis Vuitton suitcases. Asked to have her nails manicured in black, Gretchen allegedly laid her hand before the manicurist before expressing second thoughts. "Taga-saan ka?" she reportedly inquired. "Taga-Nail & Spa po," replied the manicurist, casting off any doubts Gretchen may have had about the service.

When she got hungry, Gretchen ordered one of her yayas to prepare a specially-boiled soup, using the microwave oven she brought along for the shoot. As for the fruits, all were reportedly placed in an expensive plastic container.

Not to be outdone, Dawn attacked La Greta's armor by replying, "You're not married."

IT TAKES TWO TO TANGLE. Both parties refused point-blank to discuss the spat when it broke out in public. Reports even had it that Gretchen accused Dawn of leaking the news to the press.

During the 7th anniversary of YES! and simultaneous PEP (Philippine Entertainment Portal) launch held on February 28, 2007 at the NBC Tent, Bonifacio Global City in Fort Bonifacio, Taguig City, Dawn shared her discomfort at being in the same venue with Gretchen.

Dawn labeled the tiff as "petty," while expressing both openness and a wait-and-see attitude about the conflict being settled someday.

"I'm not closing my doors, kaya lang there is the right time and venue for it. And, I don't like naman to do things in front of the whole media to watch and to see... And I feel it's more genuine if it's done in private. Whatever! I'm not saying it will happen in private. Malay natin, it will happen in another occasion na magkabatian kami. We'll see na lang how it goes."

Gretchen, for her part, said the feud was a closed chapter, in an interview with The Buzz on March 15, 2007. Prior to the interview, Gretchen granted a 22-page interview in YES! magazine's January 2007 issue. Apparently, both celebrities wanted the issue to have a natural death.

FUZZY SITUATION. Still, the question continues to linger and the reporters constantly ask Dawn and Gretchen if they have indeed put the issue behind them.

Last March 25, during a press conference tendered by Myra-E at the 9501 restaurant in ABS-CBN, Quezon City, PEP asked Dawn: When did she and Gretchen last bump into each other? She replied, "I don't remember. It's been more than a year I think."

Dawn's demeanor suggested that everything was well between her and her one- time rival. Yet one remark drew out a smile on the faces of all the reporters who were present during that presscon.

"I cannot waste my time just because I had to have something. Parang I had to have a movie kasi. I had to have a CD kasi. I don't want to do anything like that. I want to do something that is worthwhile," explained Dawn, obviously referring to Gretchen, who launched her CD, Unexpected, a month before the Myra-E press conference.

We're still waiting for the goddesses to let their hair down.