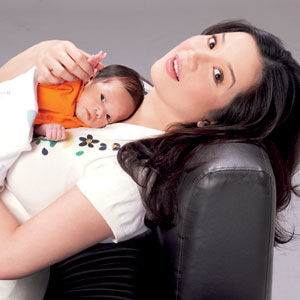 James Aquino Yap, son of TV host-actress Kris Aquino and professional basketball player James Yap, was welcomed to the Christian world on the afternoon of May 19, in baptismal rites at the Don Bosco Chapel of the St. John Bosco Parish on Amorsolo Street, Makati. The christening was strictly a family-and-special-friends-only affair.

The six-pound and reportedly long-legged Baby James, born on April 19 at the Makati Medical Center, was exactly one month old the day he was baptized. He had five pairs of godparents, a small pack by showbiz standards. On her show, ABS-CBN's The Buzz, Kris said she and James had chosen those ten individuals for their innate goodness and their genuine concern for the baby.


Baby James, by the way, is the youngest Bench endorser, and possibly the youngest product endorser this side of world. Two months before he was born premature, Kris had already signed him up for a diaper TV commercial deal.