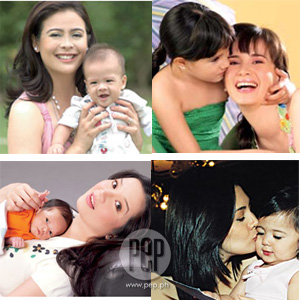 We see them on television almost every day with their shows and numerous commercials. We read about them most of the time, but the public can't seem to get enough of these ladies. We hear about their triumphs, including their letdowns in the real world. But showbiz is just one facet of their rosy life. At home, they forget all about their big names and fame.

Let us start the list with stars who place family first over their career.

She continued, "Frankie is really the center of our lives now. But s'yempre, our two daughters are our jewels, they really are. But kumbaga, Frankie's the baby, she's the helpless one, she's the one who really lights up the whole household. All babies do, `di ba?"

Three years later, Mariel Daniella Sophia, or Miel, came into Sharon's life. When Ricky Lo saw the host-actress-singer in her Laguna home a few months after she gave birth, the columnist described Shawie as "a typical mother who had a little white towel slung over her shoulder [to wipe Miel's saliva]."

At the time, Shawie became less visible in showbiz. She called her status "semi-retirement." But she is still the one and only Megastar. To this day, she still is adored by millions of Sharonians, but the thing that matters to her most, her daughters are her biggest fans.

KRIS AQUINO. Early last year, Kris was seen on TV day and night. But all that changed when she gave birth to James Aquino Yap, or baby James, last April 19, 2007.

"I now say a temporary goodbye to all of you. In the coming weeks, my one focus is to be the best mom I can possibly be to Josh and his baby brother. The only way I can succeed at this is to leave the spectacle behind me and totally retreat from the public eye," wrote the TV host-actress in her official statement.

She gave up The Buzz, her showbiz talk show every Sunday, and Game Ka na Ba?, her daily game show. Her TV exposure lessened, but her popularity never waned.

RUFFA GUTIERREZ. She was on her way to international stardom when she met Turkish tycoon Yilmaz Bektas. On March 25, 2003, she said goodbye to fame and welcomed family life with open arms.

When she gave birth to Venezia Loran, her second daughter, on September 11, 2004, Ruffa shared in her website, "I've decided to stay home and be a super mom to my 2 little girls. One so helpless and fragile that sleeps most of the time and another one who's walking, babbling and ready to explore everything she sees or touches. Lorin still has no clue that the doll-like Venice she calls ‘bee' (for baby) is soon gonna be calling her ‘Ate.'"

And even if she's back in the limelight now, the former Miss World Second Princess knows her priorities. In her PEP blog entry dated March 15, 2007, she wrote, "At the end of the day, it's neither the glaring eye of the public nor the razzle dazzle of showbiz that's most important to me." It's "whispering sweet nothings to my two little angels' ears while we're tucked in bed reading bedtime stories."

CHARLENE GONZALEZ. This former beauty queen made a lie-low in showbiz when she gave birth to her twins, Atasha and Andres, on November 5, 2002.

She considers bonding time with her kids a must in her daily routine. In a magazine interview, Charlene shared, "It's important for them to know that for the rest of their lives, their parents will always be there for them."

So right after her tapings, she heads home. If she's on a location shoot, she brings the kids with them.

"I spend time with my kids throughout the day, as early as 8 a.m. Then, when they sleep, I play sports and do my gym workouts," said the 1995 Binibining Pilipinas-Universe.

From being one of the most favorite leading ladies, Charlene drops her being an actress and is presently doing hosting chores. But she has no regrets. "More women bloom when they get married and have kids," she said.

DAWN ZULUETA. When she gave birth to Jacobo Antonio on November 19, 2005, Dawn embraced motherhood to its fullest.

Since then, her world has revolved around Jacobo. "I cannot waste my time just because I had to have something. Parang, ‘I had to have a movie kasi. I had to have a CD kasi.' I don't want to do anything like that. I want to do something that is worthwhile. Parang I think as a parent, time with your children, or in my case, with my son, is so valuable. Any time spent away from him is stolen," Dawn said in a PEP interview.

She is still visible as a product endorser, and she sometimes makes an appearance or accepts short-term projects on television, but her main purpose in life now is to be a good wife to Anton and a doting mom to Jacobo.

DONITA ROSE. There was a time when Donita Rose's name became famous all over Asia, and her face was on the cover of almost every women's magazine. When she said goodbye to her MTV Asia family, the bosses actually asked her to stay for one more year. But she chose to pursue family life with Eric Villarama.

When she welcomed her son Joshua Paul, or JP, into the world, Donita beamed: "I thought I would cry as everyone promised I would, but I didn't. I just had the biggest smile on my face and I kept giggling in disbelief that this kid was my own flesh and blood and that I carried him in my womb for 40 weeks!"

Sans glaring lights of the camera, Donita is a picture of contentment. Indeed, she had made the right choice!

There are also celebrities who juggle their career and family. But this fact doesn't make them less of a mom.

CARMINA VILLAROEL. She has a daily show, a gag show, and intermittently, a TV series. With her busy schedule, how does she manage to squeeze in her duties as a mom to her seven-year-old twins Maverick and Cassandra?

Carmina ensures that every time she has with her kids is well spent and unforgettable. They do group hugs, they laugh and play, and they even go malling in The Incredibles T-shirts.

Seeing her kids always restores all her energy. And when she's away, the thought of seeing them at night keeps her going. "They are my trophy, my inspiration. Precious sila sa akin," said Carmina in her interview with Good Housekeeping.

And the twins treasure her back. "When I get home from work, they massage my back and say, ‘Mommy don't get sick. We need you and love you.' How can you get sick with that?"

GELLI DE BELEN. Just like Carmina, Gelli also has a daily show and a gag show. But showbiz engagements do not hinder the wife of Ariel Rivera from doing her chores as a mom to Joaqui and Julio.

In her interview with YES! magazine, Gelli shares, "I take the kids to school, ‘taposI pick them up from school. Five-thirty kami gumigising sa umaga, diyusko!"

Gelli's biggest fan when it comes to motherhood is none other than her husband, Ariel said in the same interview, "She's the epitome of a hands-on mother. She gives them a bath, she brushes their teeth, everyday, ha!She brings them to school, fetches them back. Kaming dalawa,we do that. We discipline them, we do everything. We feed them, we bathe them, and that's something that not even her mom envisioned for her. And that surprises me all the time when I see her."

And for those few times that Gelli was away from her family, Ariel admitted, "Nangapa ako."

LUCY TORRES-GOMEZ. Whether she's in a taping or a pictorial, Lucy is usually on the phone during her break to chat with her unica hija Juliana. Whenever the situation allows, Lucy brings Juliana with her, and whenever there's a chance, she talks about her daughter.

She hosts two shows at present, Sweet Life and Shall We Dance, but Lucy doesn't forget that first and foremost, she's a homemaker. In one of her interviews, she said, "With the privilege of being a mother and a wife come duty and responsibility, and love fuels it. There is nothingbasta-basta about it."

When asked to describe motherhood, Lucy mused, "Motherhood makes the heart expand seven times its normal size. It teaches even the hardest heart compassion. It makes you sensitive to things happening around you such that no mother can be apathetic to or dispassionate about the plight of any suffering person."

LEA SALONGA. She's an accomplishedBroadway star, but since Nicole Beverly came into her life, she knew she had to lessen her stage performances.

In one of her interviews, Lea admitted, "Well, my priorities have changed. Everything I do now is for her [Nicole]. There's no one in the world more important than her and so whatever I do in this world always has her in mind. I don't like being away from home now, because more often than not when I have to travel for work, she remains at home. I have something to look forward to, and it's weird, I start counting down the days to when I go home, from the first day out on a trip. Day 1 pa lang, nagbibilang na ako!"

She considers being a mother her most fulfilling role. "It's wonderful, wonderful, wonderful being a mom! I'm loving every single minute of it. It's tough, though, getting up to change or feed her when I'm severely sleep deprived, which is where Rob [her husband] comes in. And he's been stellar."

She is active again in the theater circuit via Cinderella, but of course, this doesn't mean she will have less time for her daughter. Time management is the key.

In Catholic Digest, Lea said, "My baby is a gift, but my gift [singing talent] from God is a gift, too, so I have to take care of both, and not let one atrophy because of the other."

At home, the are really just like ordinary people. They change diapers, they cook for the family, and put their kids to sleep. Those are just some of the numerous things they do each day. In the reel word, they are superstars admired by fans. In the real word, they are simply moms adored by their kids. We call these ladies "supermoms."

We all still feel that Mother's Day fever here in PEP, so you guys still have the chance to make your moms feel extra special. All you have to do is post your favorite supermom in showbiz below. Easy, right?

Together with Island Rose, PEP will choose lucky PEPsters who will win a bouquet of roses for nanay! Take note: the roses will be delivered to your doorstep. What are you waiting for?