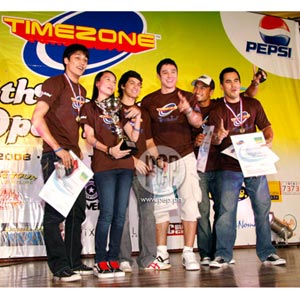 Dozens of actors and actresses from both ABS-CBN and GMA-7 pitted their brawns, brains, and reflexes against each other as they took on the challenge of Timezone's most popular games. The 5th Timezone Celebrity Open that took place at the TriNoma Activity Center was hosted by DJs Gelli Victor and Igi Guerrero of RX 93.1.

The afternoon's fun activities last April 29 started with an opening parade featuring the 11 teams. It was followed by a cheering competition where the celebrities came up with their own cheer in a limited amount of time, and did cheerleading some impressive routines.

Two preliminary games were next: the Animal Race and the "Name That Timezone Game." In the former, contestants had to maneuver their animal shaped rides along a track while collecting the required colored flags. In the latter, teams had to correctly spell out and identify the jumbled-up names of some popular Timezone arcade games.

After these, the real competition began as teams assigned their respective members to compete in particular games including Air Hockey, Super Trivia, Super Bike, Ford Car Racing Challenge, Deal Or No Deal, and of course, the ever popular Slam N' Jam.

This year's event coincided with the 10th anniversary of Timezone as well as a celebration of the family amusement and leisure center's latest and biggest branch to date in TriNoma.

Timezone's president and general manager Raffy Prats Jr. was all smiles when asked about his thoughts on this year's Celebrity Open. "We have a very big turnout of celebrities this time. We have 11 teams right now, it's the biggest ever we've had. Last year we had 10 teams. It's a far cry from the first one we had na we really had to attract people to join. Now, ang daming nag-join talaga."

He added, "It's like it had a life of its own, it's getting bigger and bigger every year and yung mga sponsors, dumadami na. If you notice, ang daming nag-sponsor ngayon. We're very happy with it and I think it's growing and growing every year as we go and do better in the future."

CELEBRITY CHAMPS. When the time had come to award the individual winners, Jeanette Tuazon of the Violet Team came out on top as the Best Super Trivia Player while Norwegian model Einar Ingebrigsten was the best in Super Bike.

ABS-CBN talents Rafael Martinez of the Black Team and actress Eda Nolan of the Red Team were victorious in the Slam N' Jam and Deal Or No Deal games respectively.

Other than their proud titles, the individual event winners also went home with Epson printers, Epraizer MP3 players with card readers, and gift certificates from Ayala Malls and Timezone.

In the cheering competition, Rica Peralejo and Say Alonzo's cartwheels together with Rodjun Cruz and Rafael Rosell's stunts helped seal the deal for the Green Team, which won first place.

Finally, the overall winners were announced. The second runner-up spot went to the Blue Team, first runner-up to the White Team, and the tournament's champions were the jubilant members of the Brown Team composed of Jake Roxas, Einar Ingebrigsten, models Dawn Balagot and Andrew Wolf, and actor Derek Ramsey.

The top three teams were also awarded with gift packs from JIF, Smuckers/Treetop, Clara Ole, Palmolive, gift certificates from Intercon Hotel for a breakfast buffet for two, Converse t-shirts and bags, giveaways from Pepsi and Timezone as well as gift certificates of varying denominations from Timezone and Ayala Malls.

Non-winning teams did not leave empty-handed as they received P1,000 worth of Timezone gift certificates, gift packs from JIF, Smuckers/Treetop, Clara Ole, Palmolive, Converse and Pepsi as well as Timezone giveaways.

It was a great way to end an exhilarating afternoon of friendly competition. And for those who want to join this grand event next year, sports personality Anthony Suntay has this to say:

"If ever you're invited to come to this event...it's really fun. It's an afternoon off from work to enjoy with the rest of your friends and make new ones as well."