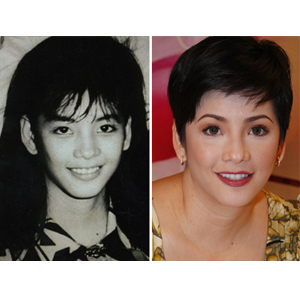 Showbiz transforms people. That is a proven fact.

These five celebrities look different when they started their showbiz careers. Some of them had a different "packaging" when they were starting, and some even had a different career plan from who and what they are now in showbiz.

Martin Nievera was the one who suggested to Regine to drop her nickname and use her real name when Regine guested in Martin and Pops Fernandez's show Penthouse Live!. It was here also that Regine met Ronnie Henares who offered to manage her. Many considered this as the turning point in Regine's career.

She was wearing big blouses with shoulder pads when she started. Today, Regine is considered by many as an icon not only in music but also in fashion, with her sophisticated and oftentimes revealing clothes that always get noticed.

JUST PR. Boy Abunda was doing PR jobs and producing shows for Channel 7 (Probe) then, when a TV executive suggested that he try hosting. The next thing he knew, he was hosting Show & Tell and later on, Startalk, interviewing stars, and throwing out colorful, almost poetic lines that has become his trademark.

When he transfered to ABS-CBN from GMA-7, his way of talking was picked up by his co-host in The Buzz, Cristy Fermin.

Today, with his skinhead do and outrageous way of dressing, Boy has reached a different level when it comes to hosting and interviewing. In fact, he recently came out with a spoken words CD featuring his interviews with some of local showbiz's most popular and important personalities.

NOT JUST "PA-CUTE" FACES. Carlo Aquino and Patrick Garcia both started out as "pa-cute" kids in Ang TV. But with all the other kids in the show trying to outdo and outcute each other, Carlo and Patrick were hardly noticeable.

Thanks to Bata, Bata, Paano Ka Ginawa? for Carlo and Batang PX for Patrick, both got the attention of award-giving bodies which resulted to awards given to them for their impressive acting.

But ABS-CBN, the network Carlo was with at that time, thought he was just too young and too cute to be put out there with the serious and mature actors. So, they put him in a "pa-cute" trio called JCS—short for John Prats, Carlo Aquino, and Stefano Mori.

Patrick, on the other hand, lay low in showbiz for a while.

God knows where Stefano Mori is right now, but John and Carlo managed to continue with their careers appearing in ABS-CBN shows and occasionally doing movies.

Now both with GMA-7, Carlo and Patrick has totally broke free from their "pa-cute" image and are both recognized now as serious actors.

FROM ANNA MARIE TO FRANCINE...AND MORE. Among the last talents to be included in Kuya German Moreno's That's Entertainment teen show was Anna Marie Falcon. Pretty and unusually tall for her age, Anna Marie was one of the most noticeable talents in the show.

When That's folded, Anna Marie went into modeling and even joined the Bb. Pilipinas beauty pageant later on.

Anna Marie did not made the cut and was one of the "thank you girls" in that pageant. But she later resurfaced with a different name—Francine Prieto.

With her new screenname and a new "packaging," Francine became the object of many men's fantasies in her movies like Liberated, Bridal Shower, and Bikini Open, and in her covers and spreads for FHM Philippines.

These are just five of the celebrities who underwent transformations as they continue to be part of the world of showbiz. We'll feature more showbiz transformations next week.