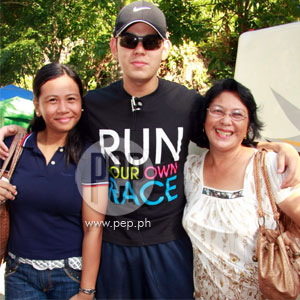 Jane Roque (left) and Emelina Cartagena (right) got the opportunity to meet and greet the whole cast and crew of Kamandag. With them is Richard Gutierrez, the main star of the show. Click here for the gallery!


Every ardent female fan dreams of only one thing: to get up close and personal with her showbiz idol. For the two lucky PEPsters who won a trip to the set of Kamandag last January 21, meeting celebrity heartthrob Richard Gutierrez was not only the realization of a long cherished dream. It was an experience of a lifetime.

The memorable event took place at Daranak Falls, a lush tropical paradise located in the heart of Tanay, Rizal, where the cast and crew were busy preparing for the explosive finale of the action-fantaserye.

LUCKY PEPSTERS. PEPsters Jane Roque, 21, accompanied by her classmate and co-Richard-fanatic Dianne dela Rosa, 22; and Emelina Cartagena, 53, who was with her sister-in-law Brown Mejia, 57, did not expect to win the PEP's "Meet-and-Greet" promo. Together with Fanatxt winner Montesa Canonico, 23, the group went to the Kamandag location for chitchat and photo ops with the cast.


Emelina, on the other hand, stood in for her daughter Ivy, 26, who was originally picked among the thousands of hopefuls but couldn't make it to the set. As PEPsters would remember, Ivy was Dingdong Dantes's date in the previous promo. But it was actually a friend of hers who won the contest; Ivy was the lucky proxy.


According to Emelina, Ivy was busy with work, so she asked her mother and aunt to go in her stead.


Jane shared that she has always been a Kapuso and has watched Richard in all of his series on GMA7. Emelina seconded this, and confessed that she has also been a "solid Kapuso ever since."


When asked who among Richard's leading ladies they think looks best with the actor, both winners were quick to admit their choices. Emelina likes Marian Rivera in the romantic comedy My Best Friend's Girlfriend, while Jane prefers Angel Locsin in Mulawin.


Ever since the 24-year-old actor was launched as a teleserye prince in Mulawin and recognized as a talented thespian in both movie and television, the two PEPsters had always been among his tight followers. Both winners admitted that they have been fans of Richard since he starred in Click seven years ago.


PEP asked the two about their thoughts prior to meeting their idol, and both said that they felt nothing short of excitement. They truly looked forward to chatting with Richard and meeting him in the flesh.


Working as a nanny to her niece, she admitted she had bouts of hesitation about going to the set, since she had tons of pending work.


FIRST MEETING. At around two in the afternoon, the winners arrived on the set in a three-car convoy with representatives from PEP and Fanatxt. Since the set was situated in a real forest with real-life dangers, it wasn't easy for the promo winners who had to cross rocky rivers, walk through wooden planks, and balance themselves on rickety bamboo bridges in order to meet the cast. Still, with the thought of seeing their real-life superheroes in person, no risk could stop Jane and Emerlina from pursuing their dream.


The first meeting took place at the foot of the hill, where cars, trailer vans, and production equipment occupied the relatively spacious entrance. The winners waited patiently with digital cameras firmly in hand and smiles all over their excited faces, as Richard's silver van parked in front.


Moments later, the celebrity heartthrob appeared in a simple ensemble of track pants, black shirt, and sunglasses. He hailed the winners from the parked van and welcomed them. Richard flashed everyone a perfectly sweet smile, which the winners took as a cue to turn on their cameras and click away. A photo session followed and the winners each took a turn to flank their idol, and to chat with him for a short while. Since Richard had to prepare for his scenes, the young actor had to put the friendly conversation on hold, with a promise to meet again later.


Jane also basked in the kilig experience and said that Richard is "very approachable and ang bango-bango!"

BONUS MEETINGS. After that first meeting with the matinee idol, the winners proceeded to the more secluded area of the set where the rest of the cast was stationed.


The uphill climb was quite an ordeal for the winners especially since the paths were narrow and steep, but much to PEP's surprise, they didn't mind it at all. Waiting at the top of the hill was StarStruck finalist Jewel Mische and actress-comedienne Alyssa Alano, whom the winners engaged in friendly conversation.


Jane admitted that aside from Richard, she liked Jewel Mische best because of her down-to-earth personality. Jewel even sent the winners several pictures of herself and Richard through her mobile phone's bluetooth application, much to the winners' delight.


After taking pictures with the two celebrities, the lucky winners went on to meet Ehra Madrigal and Ariel Rivera, who were on cue for their respective scenes.

ONCE IN A LIFETIME. The lucky winners were quick to admit that their idol was indeed a sight to behold. Richard not only looked dashing with his tall build and well-toned physique, he was always easy to approach and friendly as he joked around with his fans.


"Paano ka mag-aartista niyan kung mahiyain ka?" teased the young actor, when one of his fans said she dreamed of joining showbiz. Richard was very welcoming all throughout, and even laughed when asked whether he works out in a gym since he was looking so fit.


The winners smiled and laughed with their hunky idol, as their companions chronicled the much awaited meeting in their digicams.


At around five o'clock, the PEPsters ended their friendly banter with their idol, and left Tanay with big smiles etched on their faces.


PEP asked Jane and Emelina what they thought of the whole experience, from the two-hour ride to Tanay up to the final meeting on the set with Richard.


Their message to PEP promo hopefuls who dream of meeting their idols up close?

CHAT WITH THE REST OF THE KAMANDAG CAST!

If you want to chat with the cast of Kamandag, text:

To view the rest of the photos from their visit, click here