Lea Salonga on having another baby: "The factory is closed until 2009!" 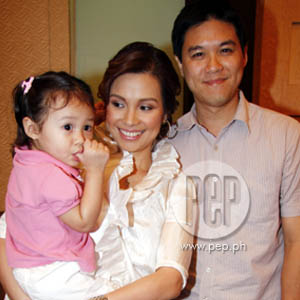 International star Lea Salonga with husband Robert Chien and their daughter Nicole at the presscon of Lea's 30th anniversary concert Lea, My Life... On Stage! yesterday, May 7, at the Crowne Plaza.

This was the reply of Filipino international star Lea Salonga when asked about the possibility of having another baby. The presscon for her 30th anniversary concert—Lea, My Life... On Stage!—washeld yesterday, May 7, at the Crowne Plaza.

Lea and husband Robert Chien already have a daughter, Nicole.

Lea explained that it's just impossible to think about giving Nicole a baby brother or sister since her calendar is fully booked until October 2009.

"As you already know, I'll be doing Cinderella after this concert. That will begin July 29 and that is the start of nine months of being involved in one production. My last day is on April 24, 2009," Lea said.

Lea added that her manager in the United States has already a project line up for her beginning May 2009 and will end in October. So it's really impossible for the international star to try for another child until October next year.

But Lea and her husband are in no hurry since they will have more time to bond with Nicole, who will turn two years old on May 16.

"As long as Robert and I can get Nicole on a relatively independent stage of her life... She is very independent, she likes to do things on her own. But once she's able to do things without any other intervention, then I could think of having another baby," said Lea.

LEA'S CONCERT. Lea's two-night concert musical Lea, My Life... On Stage! will be held at the Plenary Hall of the Philippine International Convention Center (PICC) on May 23 and 24. Lea will revisit the highlights of her 30 years in the entertainment industry—from her beginnings as a child star to her TV years to West End and Broadway musicals and movie magic.

Lea's musical director is none other than her younger brother, Gerard Salonga

According to Lea, "Another thing that makes Gerard perfect for this project is that he's my brother and he was there for many of the highlights of my career. He was there for the opening night of Miss Saigon. He actually had to miss the Broadway opening because he had chickenpox, unfortunately, but he was there when I won the award, and each of the four... I think he was there beside me.

"He had to make supreme sacrifices for my career to just keep on going in the way that it has been. I was there also when his career was taking off. So we make sacrifices for one another. So without any offense to any other musical director, whose talents are boundless and incredible, his [Gerard] perspective as a member of my family is unique, and so he has seen through my eyes, as well as his own, my 30 years."

"Yung nag-audition ako for The King and I," Lea began. "Six years old pa lang ako nun and very active ako nun sa Repertory Philippines. I think there might have been a party or something na sinabihan yung nanay ko [Mrs. Ligaya Salonga], and she heard na they're auditioning for The King and I, kailangan nila ng bata.

"So she brought me to Insular Life Auditorium. And they asked me if I could recite a poem. I said, ‘I don't know any poem but I can recite my Girl Scout's Oath.' And then I went ahead and recited my Girl's Scout Oath... And I think after my audition, I shouted to my mother who was at the back of the theater, ‘Mom, mom, how did I do?' Then she starts hiding already sa sobrang hiya. Tita Bibot [the late Zenaida Amador] said, ‘You did fine. Get off the stage.' So that's probably my first memory. That was literally my entrance to [show business]. I'm still enjoying, I'm still having fun."

THE SECRET OF MY SUCCESS. Being 30 years in the business and still on top, Lea shared the secret of her longevity when asked by a reporter.

"The same question could be asked to Dolphy, Vilma Santos, Martin Nievera, Gary Valenciano..." she replied. "The one thing they have in common is that they're surrounded by people who want to better their career.

"Second, you have to have a deep and sincere love for this business with all that come with it. There really has to be a love, a love that's so great that you will never at any point say, ‘I hate this! I want to quit! This is too much for me! I can't take this anymore!' Those words are never coming out of my mouth," promised the 37-year-old international celebrity.