Giselle Sanchez's birthday wish is to have another child 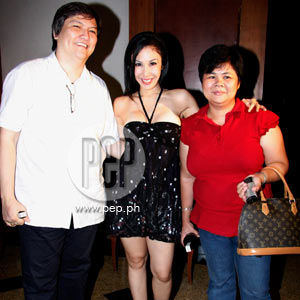 The intermittent rains couldn't stop PEP blogger and sexy comedienne Giselle Sanchez from celebrating her birthday last Saturday, May 10. The 30-something corporate host held her post-birthday celebration at Salcedo Condo Tower in Makati City with an after-dinner party that overflowed with inebriating drinks and canapés.

Giselle had wanted to celebrate her party at the poolside of the Salcedo Condo Tower but due to the rains earlier that evening, she opted to move the party indoors. A mobile unit provided music for the guests, most of whom went ballroom dancing on the spacious dance floor.

PEP (Philippine Entertainment Portal) chatted with the birthday girl (whose actual birthday is May 4) during her party and asked her about her birthday wish this year.

Giselle's daughter Lia is already four years old. Aside from being a host in corporate events and doing stand-up comedy, Giselle will soon be seen in the upcoming ABS-CBN primetime show Parekoy.

Giselle introduced her good friend Terri Reed of Amazing Race Asia fame. The two women met each other when they both auditioned in Singapore for the said reality show. According to Teri, her husband Henry was unable to attend the party since he had to wake up early for a tennis match the following day.

Some of Giselle's guests were the Showboys of SOP: Marco Morales, Reynald Talosig Jr., and Joseph Salomon who came with his best friend Albert. Talent manager Manny Valera came with Giselle's handler Beth de los Reyes-Rivera after watching the world pyrolympics held at the Mall of Asia earlier that night.

Star Magic talent Marianna del Rio and GMA-7 artist Alessandra de Rossi also made it a point to attend Giselle's party, which lasted until the wee hours of the morning.