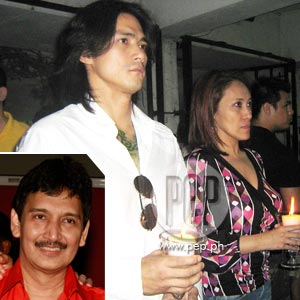 Robin Padilla and Ai-Ai delas Alas took part in the offertory of the healing mass held yesterday, May 10, at the Christ the King church in E. Rodriguez, Quezon City.

On May 10, a day before Mother's Day, showbiz personalities took the time to attend a mass offered for the "healing of the body, mind and spirit" of Rudy Fernandez.

The Christ the King church in E. Rodriguez, Quezon City was filled with stars and directors who showed their support for Daboy, who is afflicted with pancreatic cancer.

The mass, which was celebrated by Fr. Arlo Yap and Fr. Larry Faraon, started at around 4:45 pm and ended at around 6 pm. At the end of the mass, Fr. Jerry Orbos led the people in singing "Come Holy Spirit" and lifting of hands for the healing of the action star.

Rudy, who was confined at that time, was unable to attend the mass just like his wife, actress Lorna Tolentino. Meanwhile, their children Renz and Ralph were at the church to answer questions and receive support from the showbiz industry. Mark Anthony Fernandez, Rudy's son with Alma Moreno, was also there with his wife Melissa Garcia.

Actress and Mowelfund Head Boots Anson-Roa served as the lector of the mass, which she said was supported by the Oasis of Love community and the Film Academy of the Philippines (represented by Director General Leo Martinez).

Robin Padilla and Ai-Ai delas Alas arrived together and were seated beside Robin's children, Kylie and Queenie, who wore the traditional Muslim dress inside the church. Tonton Gutierrez accompanied his wife Glydel Mercado, who was chosen to read a passage from the Acts of the Apostles for the first reading.

Rudy Fernandez previously took part in the GMA-7 fantaserye Atlantika and his co-stars Iza Calzado and Diana Zubiri made it a point to attend this healing mass.

Directors Manny Valera, Gil Portes, and Boots Plata also showed their support for their good friend Daboy. Presently, Bong Revilla and Lani Mercado are in Hong Kong to celebrate Mother's Day, which is why they were not present in the healing mass.

He recalls: "Three years ago, I asked myself, ‘Why of all people, bakit si Rudy Fernandez?' Nine months after his operation, cancer cells were again active and he went to the United States for a month. When he came back, dun na po nagsimula ang problema. Doctors no longer have any alternatives to offer. Kaya sana po ipagdasal natin siya."

After the mass, PEP (Philippine Entertainment Portal) was able to talk with Renz and Ralph regarding their father's health condition.

"He is healing right now because of the prayers of everyone," says Ralph. "This morning, he was feeling very good, so that's good news. He is in pain but we have pain specialists to take care of that."

Phillip Salvador pointed out that despite Rudy's illness and his pain, Rudy was the one who kept everyone's spirits up.

How is Lorna holding up?