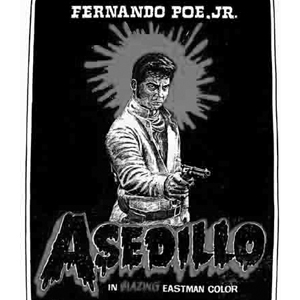 After the "Asedillo Incident" that happened in Mindanao in 1971, it became S.O.P. (Standard Operation Procedure) for any movie made by Fernando Poe Jr. not to kill his character at the end.


LEGEND. During the 1970s, stories circulated about Muslims going ballistic in movie houses where a Fernando Poe Jr. movie was being shown. Allegedly, our brothers and sisters in Mindanao threw stones (in other stories, fired their guns) at the movie screen and demanded their money back from the theater owners. They were enraged when Da King got killed in the movie they were watching.

The news was hardly worth taking seriously, what with talks of impending Martial Law heating up. But showbiz writers, particularly FPJ's publicists, picked it up anyway and made it even more of an urban legend than the published reports.

The movie where FPJ was killed was Asedillo, which was about a school teacher turned rebel who gave the abusive rich and powerful a hard time, and paid for it with his life. FPJ was so convincing in his performance that he won the FAMAS Best Actor award.

But more convinced than the FAMAS judges were the Mindanao Muslims who watched the movie. For some of our Muslim brothers, the action scenes in Asedillo looked so real that they even joined the gun-battle by shooting at FPJ's enemies in the movie.

Mrs. Alicia Salanga, then in her 20s, was among the moviegoers who ran outside the Zamboanga City theater where one of the shootings happened. After this incident, Mrs. Salenga said, all the three Zambo movie houses, and another one in Jolo where Asedillo was being shown, began cutting the scenes where FPJ was either being beaten up by goons or getting killed. Theater owners apparently feared that FPJ fans would go into another shooting spree inside their movie houses.

Hence the conclusion that Muslims hate it when FPJ dies in a movie. From then on, no more death scenes for FPJ in any his movies, except in Padrino (1985) where, after he was killed by a hitman played by broadcaster Rey Langit, it turned out he was alive and was just hiding so he could find out who made the hit on him.

Prof. Moctar W.I. Haron, IS, MPA, MA, Sharia Lawyer and Translator of the Office of Muslim Affairs, said he was a young lad in Basilan when news of Muslim FPJ fans shooting at the canvas screen of cinema houses spread.

MUSLIMS LOVE FPJ. Prof. Haron said the FPJ fans who shot at the screen were obviously disappointed at their idol's fate. Some of them were probably unschooled, he reflected, and they must have thought that the action onscreen was real. Muslims hold Fernando Poe Jr. in high esteem because, first and foremost, he was the only actor they knew and idolized, said Prof. Haron.

But why, of all the other actors during that time, was FPJ so popular with the Muslims?