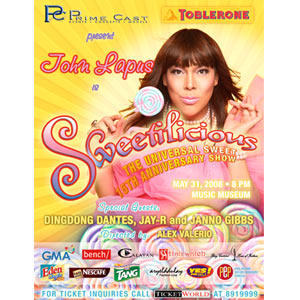 John "Sweet" Lapus will stage a one-night show titled Sweetilicious at Music Museum on May 31 (Saturday). Get a chance to win two tickets to Sweetilicious by joining our online promo. Check out the details below.

John "Sweet" Lapus had been entertaining the public even before he entered the mainstream media. He was part of Teatro Tomasino, the theater guild of the University of Sto. Tomas, where he graduated with a degree in Hotel and Restaurant Management. After graduation, he got the chance to perform at the University of the Philippines.

In 1993, as a researcher for ABS-CBN's Showbiz Lingo, John became steeped in the local entertainment scene. He was promoted as head researcher, producer, and eventually associate producer for The Buzz. Before he left the Kapamilya Network, he held the position of creative consultant.

He now works as one of the hosts of Showbiz Central in GMA-7 and will soon be seen in the local version of Kim San Soon.

John was baptized "Sweet" when he played a character in the Jolina Magdangal sitcom titled Arriba! Arriba!

For 15 years, John "Sweet" Lapus has been entertaining the public, both onscreen and behind the cameras. This year marks the 15th year anniversary of Sweet in showbiz, and as a special treat, he will be performing in a one-night concert titled JOHN LAPUS IS SWEETiLiCiOUS: The Universal Sweet Anniversary Show. This will be held at the Music Museum on May 31 (Saturday).

To join in the celebration, PEP (Philippine Entertainment Portal) asked Sweet to list down 15 people who are closest to his heart. What with his many years in show business, the TV host-comedian-actor found it hard to pick just one person for some categories.

Sweet made a list of the people who best fit each category but due to space constraints, only one picture could be accommodated to represent several people who tied in some entries.

Here are the Top People—beloved, admired, memorable—in Sweet's life for the past 15 years, with his own comments:

1. Most influential showbiz friend: Kris Aquino. (Ed.'s note: It's not surprising to learn that John is very close to Kris since they spent a lot of years together as co-hosts in The Buzz. John even has term of endearment for the TV host-actress: Ganda.)

7. Comedian who influenced you the most: "Wala naman. I think I have my own style but I admire Ellen Degeneres. Yung honest lang pero nakakatawa."

13. Other than your family and friends, who is the person that you would run to pag kailangan ka niya? "Joshua Aquino. Kinailangan niya ako noong first communion niya, at tinuli na siya last Monday (May 12), nandoon pa din ako."

14. If you could be reincarnated, who would you choose to be? "Ricky Reyes. Ang yaman at ang bait. Hahaha!"

15. Who do you consider sweetilicious? "My fans. After 15 years in showbiz, after two giant networks, after kong sumikat-malaos-sumikat ulit, nandiyan pa din sila. Ang sweet! I have met some of them, matataray din pero sweet. Sweetilicious talaga!"

Sweetilicious is on May 31 (Saturday), 8 pm, at The Music Museum. His special guests are Dingdong Dantes, Jay-R and Janno Gibbs. Sweetilicious is directed by Alex Valerio.