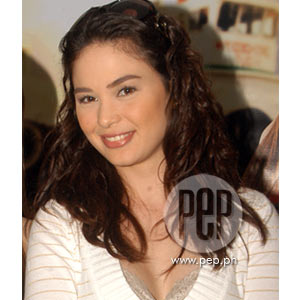 After scoring a victory against entertainment columnist and TV host Lolit Solis in the Piolo Pacual-Sam Milby issue, ABS-CBN Star Magic this time called the attention of broadsheet columnist Dolly Anne Carvajal for allegedly attacking the character of Kristine Hermosa in print without bothering to get the young actress' side.

In her column in a daily broadsheet (April 14, 20, and May 12), Dolly Anne repeatedly tackled the rift between Kristine and Prinsesa ng Banyera director Andoy Ranay. According to Dolly Anne, the misunderstanding between the two escalated to the point that Direk Andoy chose to skip the last shooting day of the afternoon soap than work with Kristine even for the last time.

The amiable director also clarified that the problem between him and Kristine stemmed from their common desire to make the show better—strictly professional and nothing personal.

ONE-SIDED HEARSAY? ABS-CBN's Star Magic accused Dolly Anne of being unfair by not even bothering to get Kristine's side of the story. The articles, as observed by Star Magic, clearly favored Ranay.

Star Magic shielded Kristine's character by saying: "Kristine has in the past been a difficult actress because of her youth and inexperience, and she had always been a reluctant actress and star. But in recent times, she has shown a certain maturity borne out of experience and wisdom and has exerted professionalism to a high degree."

Star Magic also issued a call to all the entertainment reporters by reminding them about their responsibility to be fair at all times, particularly to their subjects.

"We believe in a free often-rambunctious colorful showbiz press and that everyone is entitled to his or her opinion. Hopefully it will be an opinion formed by reasonable inquiry and not one-sided hearsay."

In a text message she forwarded to The Buzz, Dolly Anne stressed that she has no personal vendetta against Kristine, nor does she harbor any desire to discredit the young actress before the public.

Dolly Anne pointed out: "As a star, it's Kristine's prerogative to deny. As a writer, I'm duty bound to my readers to write the truth. I have nothing against Tin-Tin. Hope she'll consider my item about her and direk Andoy a wakeup call. Her attitude problem is already an open secret in the industry. Perhaps it's just a phase she's going through. As her show comes to an end, may the controversies hounding her die with it too."