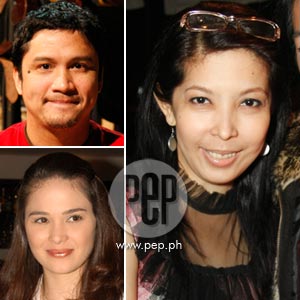 "As a star, it's Kristine's [inset, bottom] prerogative to deny. As a writer, I'm duty bound to my readers to write the truth. I have nothing against Tin-Tin. Hope she'll consider my item about her and direk Andoy [inset, top] a wakeup call. Her attitude problem is already an open secret in the industry. Perhaps it's just a phase she's going through. As her show comes to an end, may the controversies hounding her die with it too," said Dolly Anne Carvajal (ma

The three articles—which were put out last April 14, 20, and May 12—failed to get the actress's side of the story about her reported rift with Prinsesa ng Banyera director Andoy Ranay. This was according to the said talent center that runs the careers of some ABS-CBN stars.

Dolly Anne Carvajal wrote an email to PEP (Philippine Entertainment Portal) last night, May 19, airing her reaction to the issue.

"I completely understand where Star Magic is coming from," the columnist began. "At the height of the Piolo/Sam VS Tita Lolit controversy, Star Magic, Sam, and PJ thanked me on national TV for defending them even if they never obliged me to do so."

But in this particular issue, this was clearly not the case. Star Magic's statement released to The Buzz last Sunday, May 18, took offense at the way Dolly Anne had put Kristine in a bad light.

The statement of Star Magic read: "We believe in a free often-rambunctious colorful showbiz press and that everyone is entitled to his or her opinion. Hopefully it will be an opinion formed by reasonable inquiry and not one-sided hearsay."

To this Dolly Anne retorted, "Now that medyo unfavorable yung nasulat ko about one of their wards [Kristine Hermosa], Star Magic fires back at me. That's expected kasi siyempre it's their job to protect their talents like Kristine. How weird lang na just a few months ago they were praising me and now they accuse me of writing hearsay? Komo negative ang story about their ward, they dismiss it as hearsay? Sorry but that has never been my style. I know I run the risk of sounding defensive here but I just wanna clear my name."

In the same segment aired on the said talk show, Direk Andoy was interviewed. He did not deny that he and the soap's lead star had a spat, but he refuted one of Dolly Anne's claims that the director had avoided working with the actress, so he opted not to attend the last taping day.

The columnist of "Dollywood," which has been running for 10 years now, told PEP, "I don't usually reveal my sources but ako na ang naiipit ngayon so I hope Direk Andoy will forgive me for naming him as my source.

"How would I know such details about their taping kundi insider like Direk ang nagkuwento? Kaya I was so shocked when he said on The Buzz na tinapos niya ng maayos ang Banyera. I felt betrayed!

"I protected him from day one by not naming him as my source, ‘tapos ako pa ang nilaglag niya. Direk Andoy and I call each other ‘invisible friend' 'cause di pwede malaman na we know each other at mabuko na he spilled the beans on Kristine.

"I feel bad na it had to come to this. I kept telling Direk Andoy na ‘di ko siya mention na source 'cause I don't want to jeopardize his work sa ABS. But his interview in The Buzz leaves me no choice. I understand Direk Andoy has to save face 'cause he has other projects with ABS-CBN but sana not at my expense."

Lastly, with regard to Star Magic's point that she failed to get Kristine's side, Dolly Anne explained, "I also intended to get Kristine's side. But since di naman daily ang columns ko and dami pa pending issues, & press releases, na-overlook ko. I wrote Ms. Rikka Dylim's [of Star Magic] reaction na it's unfair ‘coz Kristine is working hard. My column is open for Kristine's side too. Nauna lang yung kay Direk Andoy. Before I realized it, the issue has been blown out of proportion."

At press time, PEP is trying to reach Direk Andoy.