It's all about Gabby Concepcion and Sharon Cuneta this June in "YES!" magazine 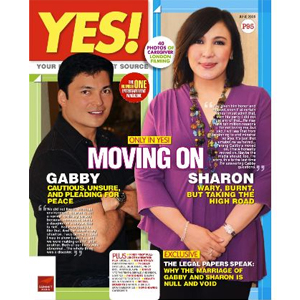 THE UNSURE AND THE WARY. Gabby Concepcion and Sharon Cuneta on the cover of the June issue of YES! magazine.

In his 12-page feature, Gabby talks about his return to Philippine showbiz, his problem with his contracts (which his current manager Rose Flaminiano helps to explain), his anger and disappointments in the business, his life in the U.S., wife Ginbee Gonzales, his plans for the future, KC, and of course—hesitant at first and very cautious in discussing—Sharon Cuneta.

Gabby is careful in his words on revealing why their marriage did not work, but points to "outside influence" as one of the reasons.

He also says, "We did not live in a normal environment. Sharon is not a normal, ordinary person because, remember, she is a daughter of a mayor. She is rich... Not everybody is like that. And the same in my situation. I was barely 21, and I was in show business, and we were making one hit after another. Both of our lives were abnormal. We didn't see it that way back then, that's why we can't say who made a mistake or what went wrong. The whole thing was a disaster."

Sharon, on the other hand, for the first—and probably last—time, shares select stories about their break-up in her 10-page interview. To put a stop, as she says, to people talking "about things they really they don't know anything about."

Sharon did not reveal all there is to know about her separation with Gabby, but gave statements that would lead one to guess on what triggered Sharon to leave Gabby.

She says, "He's one of the most good-looking men in this business! In this country! So I could not have expected somebody that good-looking, that young and popular, to be very far away from temptations. Siguro, at that time, I just could not believe it because it was really the last thing I want. So, marami nang nangyayari, I don't want to get into details. Up to this day, I remind everyone nobody knows exactly why we separated. Truth be told, once we were married, he really was not the husband that I'd dreamt of."

More exclusives in the June issue of YES!-a 10-page photo gallery of the movie Caregiver, with 40 pictures provided by Sharon herself, with her own captions; a sentimental look-back at Sharon's pregnancy and birth to daughter KC, and the court documents declaring Gabby and Sharon's marriage null and void.

These and more in the June issue of YES! which is now available in all magazine outlets.