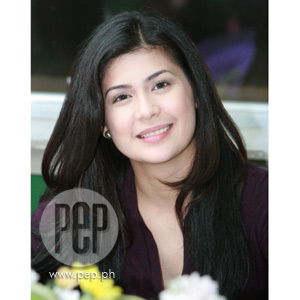 After failed relationships with Joross Gamboa and Jake Cuenca, young actress Roxanne Guinoo says that having a love life is not for her.

Jockeys positioned their horses at the starting line of the Sta. Ana Racetrack in Makati City. The crowd, composed mostly of male patrons, waited patiently for the horse race scheduled last night, May 21. At around 8 p.m., the race starts and people start cheering for the horses that they betted on, temporarily shifting the attention of the stars and the press people gathered at the VIP lounge of the Sta. Ana Racetrack.

"We would like to share with all of you the milieu of the new show," explains Riza Ebriega, production manager of Ligaw na Bulaklak. Even though this teleserye has the same title as the 1976 film featuring Alma Moreno and Lorna Tolentino, Ms. Ebriega pointed out that the plot of this soap opera has nothing to do with the movie.

Ligaw na Bulaklak—which was previously called Wild Orchid before being named Wild Flower, and then Cattleya and Ligaw—stars Roxanne Guinoo as a "whisperer" to a champion horse. She is paired with three leading men: Sid Lucero, Kjwan vocalist Marc Abaya, and Ron Morales of Be Bench fame.

Since this is Roxanne's follow-up project after breaking up with Jake Cuenca, how does she feel about working without an inspiration?

Is she wary of falling in love again?

Is there a possibility that Roxanne will be linked to one of her leading men?

Almost all the major cast members of Ligaw na Bulaklak were present during the grand presscon except for Ara Mina, Coco Martin, and Jodi Sta. Maria. Ara, who plays Roxanne's rival Janet, was unable to attend because she is in the Ilocos. Meanwhile, Coco Martin is currently in France to attend the Cannes International Film Festival for the indie film Serbis.

Ligaw na Bulaklak airs after Wowowee on ABS-CBN starting May 26.