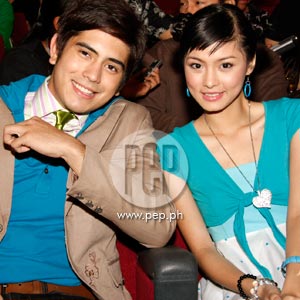 Despite the closeness, a new series and an expensive gift, young actress Kim Chiu says that she and love-team partner Gerald Anderson are only and still the best of friends.

Playing the spunky character of Jasmine in the local adaptation of the hit Koreanovela My Girl is both easy and tough, according to Kim Chiu.

But what made Kim's interpretation of the role different from the original is how she integrated her own energy with the beloved Korean character's happy nature.

RETURN TO SENDER? Despite considering other actors to play the part of Julian, ABS-CBN decided to pair Kim once again with love-team partner Gerald Anderson.

My Girl co-director Jerome Pobocan expressed delight with the final choice. "Why fix it if ain't broke?" he told PEP (Philippine Entertainment Portal) in a separate interview, pertaining to the love team of Kim and Gerald.

The chinita actress was reluctant to accept the gift at first. Her strict dad even suggested that she politely return the vehicle. Gerald, as expected, was against the idea.

STILL REEL, NOT REAL. During Kim's belated debut party last April 26 at the Glass Garden in Santolan, Pasig City, Gerald was very vocal in saying that given a chance, he would love to formally court Kim.

Almost a month since Gerald's brave confession, Kim was asked about the real status of their off-screen relationship.

"Hindi pa," replied Kim when quizzed if they are already an item. The young actress openly admitted her apprehensions in taking their friendship to the next level, particularly the repercussions of facing relationship issues and its effect on their professional lives.

Some reporters joked that perhaps Gerald was already fishing for that elusive "yes" when he presented her the expensive birthday present.

That said, Kim clarified that she's not shutting down the possibility of entering into a serious relationship with her co-PBB Celebrity Edition housemate. But for now, she'd rather have fate take its course than force the issue.