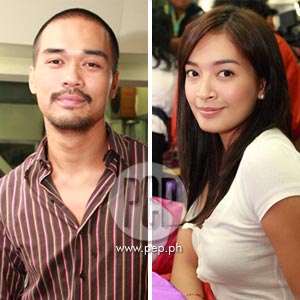 For the first mainstream project of Kjwan vocalist Marc Abaya, he is paired with Roxanne Guinoo in the upcoming daytime teleserye Ligaw na Bulaklak. Another actress, Ina Feleo, plays Roxanne's friend who is also residing in the correctional facility, Girls' Home, located in Marikina City.

Marc Abaya and Ina Feleo have a few things in common: they are both children of well-known directors and Ligaw na Bulaklak marks their acting debut in mainstream media.

According to Marc, his band Kjwan is still intact despite the fact that he is trying his hand at acting in a soap opera. "I think it was perfect timing because my band is recording an album. We spent more time inside the studio more than anywhere else kaya it was perfect."

The former MTV VJ said that their next album will be titled 13 Seconds to Fame and is expected to be released by July this year. He points out that their first two albums were filled with anxiety but this time, "masaya na kami, wala na masyadong angst."

Why did he choose to try acting after being a singer and a host?

"I don't know how far I'll go [in acting]. I don't know if I'll do well or if I'll suck but I'll make sure that the band won't be compromised," he said.

FAMOUS OFFSPRINGS. Since Marc and Ina are descendants of showbiz personalities, how does this help them in penetrating the competitive world of local tinseltown?

Ina says that her mom has praised her for her portrayal of a saleslady in the indie film Endo. This 2007 Cinemalaya entry earned Ina a Best Actress Award during the 2007 Cinemalaya Film Fest. She is also nominated for the category Best Performance by an Actress in a Leading Role (Drama) for the 5th Golden Screen Awards of the Enpress.

As for Marc, he says that he is constantly reminded by his mother to remain humble and to be respectful towards people—regardless of their status in life.

How did his mother prepare him for the entertainment scene? Marc reveals, "Sa movie na Noon at Ngayon (2003), pinasama niya ako as PA [production assistant]."

When asked about the condition of his mother, who was diagnosed with breast cancer last year, he says that she is "100 percent cured." He says that she underwent chemotherapy in St. Luke's Medical Center and that the cure could be attributed to good doctors and plenty of prayers.

"She's stronger than me. She was strong for the whole family. We always knew that she would get out of it," says Marc.

He says that his mom is busy performing her duties as the president and director of studies of the Marilou Diaz-Abaya Film Institute and Arts Center in Antipolo. As for Direk Laurice, Ina says that her mother is cast as the mother of Gabby Concepcion in the upcoming teleserye Iisa Pa Lamang.