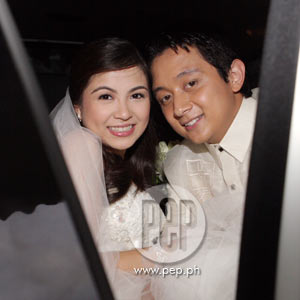 Inah, who is five months pregnant with their first child—a girl they plan to name Alexa Daniella—walked down the aisle crying, but genuinely happy.

"Actually, I didn't expect that I was sobbing while I was walking through the aisle. I guess I was overwhelmed, kasi before ako pumunta sa church, I was pa-easy-easy lang. Then pagdating ko doon, biglang..." said the bride during the reception.

The mother and father of the bride became emotional during the nuptials.

"We're just here to guide them, support them. Ang wish namin for the both of them, sana magkaroon sila ng magandang pamilya, happiness, katulad ng inabot namin [ni Lani], despite of all the intrigues. Bago makasal sila, marami nang pagsubok na dinaanan. Muntik pa hindi matuloy ang wedding because of some people trying to destroy our relationship with the other side [Vince's family]. Ang point is at least naayos and we will do this because of my daughter. We love our daughter, we love Vince."

May 28 turns out to be a double celebration for it's also Bong and Lani's 22nd wedding anniversary. When asked how they are going to celebrate it, Lani said, laughing, "Kami na lang dalawa doon."

THE RECEPTION. The nuptial mass was followed by a grand reception attended by family and close friends at the Rizal Ballroom of the Makati Shangri-La Hotel.

There was an audio-visual presentation of the couple's love story with a funny intro of Vince, in Bong's costume from the movie Agimat, rescuing the damsel Inah.

The Revillas did an AVP relaying their wishes for the newlyweds.

Inah's eldest brother Brian Revilla said to his friend Vince, "Take care of my sister. We love her so much. I never expected that you would be my brother-in-law this soon. I was expecting siguro 10 years, 15 years or something like that, pero napaaga, e. Well, at least I know that my sister is in good hands. You guys deserve each other. Congratulations and I love you guys."

The hosts for the reception were Ketchup Eusebio and Iya Villania. Singers Aiza Seguerra, Richard Poon, and Martin Nievera serenaded the couple.

Vince and Inah will move out today, May 29, to their new home—a P10 million, fully-furnished condo unit in Makati, which is a gift from Vince's dad.