The two sides of Ehra Madrigal 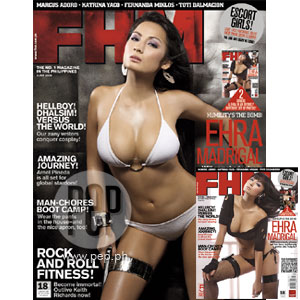 Ehra Madrigal sizzles you with twice the heat in this May 2008 issue of "FHM."

It has been a while since Ehra Madrigal made her debut on the pages of FHM, the undisputed number one men's magazine. After her sweet climb to success, following her number 5 spot in last year's FHM 100 Sexiest Women in the World list, it's only right for FHM to give her another cover appearance. "Parang after nung nag-No. 5 ako last year, sunud-sunod ang shows and offers," Ehra admits.

This June, FHM presents not only one, but two covers, with different sets of pictures each, to present two different sides of Ehra in a videogame-inspired theme—one as a sweet-looking seductress, and another as a foxy vixen ready for action.

"We had to do two FHM covers, each with a different set of photos, especially for this issue to be able to share with our readers as many pictures of Ehra as we can. She did such a great job, we just couldn't narrow them down to a few spreads," Editor-in-Chief Allan Madrilejos explains the reason behind this month's double cover.

Now that she's tagged as one of the industry's sexiest items, has she toyed with the idea of top-billing a sexy movie of her own? "Depende sa story, and with the director and other things," Ehra answers thoughtfully. "Kasi pag gumawa ka ng ganu'n, there's no turning back."

Keep voting for your favorite in the FHM 100 Sexiest Women in the World 2008 poll! To vote, key in FHM100 [space] name of candidate and send to 2948 for all networks. You can also log on to FHM.com.ph to vote, and check out behind-the-scene clips of the FHM photo shoots.

Grab the latest issue of FHM featuring Ehra Madrigal on two different covers with a different set of photos each, now available in magazine stands and bookstores for only P125 per copy.