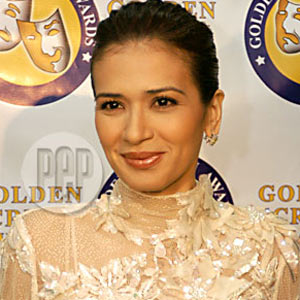 Expressing gratitude for her successful career, Zsa Zsa Padilla could not ask for anything more on her 44th birthday. "I have so much to be thankful for and I am grateful to God for all my blessings."

Filipino music lovers know her as the Divine Diva. She popularized some original Pinoy songs, such as "Hiram" and "Mambobola." That's Zsa Zsa Padilla-songwriter, singer, and actress.

Even as a child, Zsa Zsa already knew that she wanted to be a great singer. When PEP (Philippine Entertainment Portal) asked her when she started singing, she recalled, "I can remember singing as a child. It was something that was second nature to me."

Before she won acclaim as the "Divine Diva," the public first saw her as a member of the popular '70s band called Hotdog, who developed the type of music called "Manila Sound." This band helped Zsa Zsa to become a well-known solo artist in the early '80s.

After leaving her band Hotdog, Zsa Zsa received a lot of movie and TV offers from different producers and directors. But it took several years before she finally gave her nod to the classic drama series titled Lovingly Yours Helen. Following this was a role in a comedy film Mga Anak ni Facifica Falayfay (1987) with the Philippine Comedy King and real-life partner Dolphy.

This was just the start of her career as an actress with, of course, a singing career on the side.

At 44, Zsa Zsa has already achieved most of her dreams. She produced 12 record albums since she became a soloist and has been part of 22 movies since 1987.

For her birthday last May 28, PEP asked Zsa Zsa about the memorable songs and the people who have been part of her singing career.

MEMORABLE SONGS. Zsa Zsa has performed more than a hundred songs, both originals and covers. Of all these songs, which are the most memorable because they involve the people who have been part of her life?

"Top of the World." Zsa Zsa remembers singing this Carpenters song in public during her grade school years with her cousin, Gino Padilla.

"Forget Me Nots." This is an '80s disco song originally sung by Patrice Rushen, which Zsa Zsa loved singing with her former Hotdog bandmates. The diva told PEP that she sang it with Hotdog in Circuit Disco of Hyatt Hotel.

"I loved singing it," said Zsa Zsa. "The song was used years later in the movie Men in Black of Will Smith. I also enjoyed doing "Hit Me with your Best Shot" and a medley of Hotdog hits.

"Never Forget You." If Zsa Zsa would choose her favorite among all the Hotdog songs, she would pick "Never Forget You." She recorded this song as a duet with bandmate, Rene Garcia. The singer added, "It is an original composition of the Hotdogs, which was the flipside to the carrier single ‘Careful, Careful'. I only recorded two songs for the band while I was with them."

"If." This song was popularized by the music group Bread. Zsa Zsa dedicates this song to her longtime partner Dolphy because, says she, "It was the song used in our first movie together, Mga Anak ni Facifica Falayfay."

REMARKABLE DUETS. Although she's better known as a solo artist, Zsa Zsa also performed ably with fellow singers both in concerts and in the recording studio.

GARY V. Zsa Zsa remembers singing Bonnie Tyler's "Total Eclipse of the Heart" with Mr. Pure Energy, Gary Valenciano. "It was a hit song in the early '80s and it was among the first duets that we did together." The first song they recorded together was "Could We."

The local diva also liked singing with Gary V. the popular ballad "Broken Vow" in their Faces of Love concert. The special reason was, Zsa Zsa said, "We shot a [music] video, which he directed.

"I seldom get to act with Gary and in this rare footage, which we show before the song goes on, I was able to do something with him which I am also passionate about-acting."

MARTIN NIEVERA. The Divine Diva worked together with Concert King Martin Nievera in their show Divine Madness. "We did several duets but what stands out the most is ‘Tell Him' [by Celine Dion and Barbra Streisand, her singing idol]. Martin changed some of the words to fit his lines with the point of view of a man."

KUH LEDESMA. Another Zsa Zsa favorite was her performance with fellow diva Kuh Ledesma. "In our show Diva 2 Diva, we did very nice vocal arrangements of ‘Broadway Medley', ‘The Prayer', and [Mandy Moore's] ‘Only Hope'. Also memorable is a medley where we ‘exchange' interpreting hit songs."

DOLPHY. Of course, Zsa Zsa would not miss singing with her partner Dolphy. Zsa Zsa related, "We did an impromptu duet during my 38th birthday celebration at the Mandarin Hotel of ‘You Make Me Feel So Young' [by Frank Sinatra]. It was recorded live and is part of my album called In My Life."

KARYLLE. As the mother of young singer Karylle, Zsa Zsa describes her friendship with her daughter in the song "Thank You" of Dido. "Our first duets together were quite emotional," says the diva.

ZSA ZSA'S MENTORS. Aside from these people she worked with, Zsa Zsa is also forever grateful to the following people for helping her become the artist she is today.

Former managers Ronnie Henares and Sandra Chavez: "They both taught me and honed me to be a better performer."

Record producers, "Willy Cruz, Chito Ilagan, Johnny Alegre, Eugene Villaluz, Ben Escasa, who have all helped guide me during recordings of my albums."

Lastly, when PEP asked Zsa Zsa which song best describes her life today, she gave Rod Stewart's "Have I Told you Lately That I Love You?"

"I'm glad that I spent the first hour of my 44th birthday in Baclaran church. Just like the song says, ‘And at the end of he day, we should give thanks and pray to the One... to the One.' I have so much to be thankful for and I am grateful to God for all my blessings."