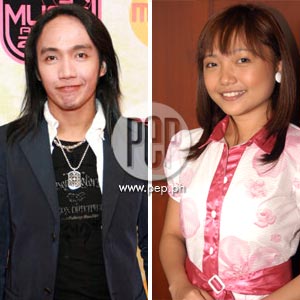 Charice Pempengco (right) performs at the recent concert tribute prepared for songwriter David Foster, while Ellen DeGeneres chooses Arnel Pineda (right) to be a guest on her talk show, The Ellen DeGeneres Show.

In a recent episode, Ellen stated the reason she wanted Arnel in her show. "This is the guy that there is no way you could criticize," said the popular host. "I don't know if you saw this, but there is a guy that is from the Philippines and he sings Journey songs. He put this on YouTube, incredible! This guy, this is not lip-synching, he's actually singing."

Arnel Pineda was a former vocalist of the local band called Zoo, which had regular gigs in different bars in Metro Manila. They often performed cover songs by Journey, Aerosmith, Led Zeppelin, Air Supply, Survivor, and other popular acts from '70s, '80s, and '90s. (Click here to read related article).


His fame slowly started when a longtime fan and friend uploaded videos of his performances in YouTube. Ellen further narrated, "He is incredible and the guitarist from Journey, Neal Schon, saw this video and he sent an e-mail to Arnel. Arnel e-mailed back and now Arnel is in the studio recording the Journey album. He's gonna be the lead singer of Journey. How cool is that? Let that be a lesson to you, don't stop believing."

Later on, Ellen expressed how she wanted Arnel and the rest of the Journey band be on her show for an interview. "I think I want him on the show. We're talking to him if he may be on the show, the whole band."

Yesterday, May 27, the episode where Journey performed on Ellen was aired. They performed "Separates Ways" and their new single "After All These Years." After their first performance, Ellen had nothing to say but "unbelievable!" while the studio audience gave them a standing ovation.

Journey is a '70s American rock band that popularized the songs, "Open Arms," "Don't Stop Believing," "Separate Ways," and "Wheel in the Sky."

CHARICE HONORS FOSTER. Meanwhile, Oprah Winfrey often said in her show that it was David Foster who introduced her to Charice Pempengco.

Last Saturday, Charice was one of the singers who performed in the concert tribute prepared for the said famous songwriter at the Mandalay Bay in Las Vegas, Nevada.

David Foster personally introduced Charice to the audience. The 15-year-old singer Filipino singer sang Whitney Houston's "I Have Nothing" and "I'll Always Love You" and "And I'm Telling You I'm Not Going" from Dreamgirls. For her great performances, Charice received two standing ovations from more than 10,000 people who watched the show.

Foster is the composer of the songs, "Tell Him" (Barbra Streisand and Celine Dion), "Through the Fire" (Chaka Khan), "You'll See" (Madonna), "Hard Habit to Break" (Chicago), "When I Fall in Love" (Clive Griffin and Celine Dion), "Stand Up For Love" (Destiny's Child, "After the Love has Gone" (Earth, Wind, and Fire), and "I Have Nothing" (Whitney Houston). Charice sang the latter during her guest appearance in Oprah earlier this May.