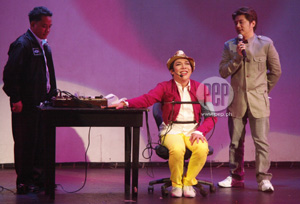 This time, it's John "Sweet" Lapus's turn to take the hot seat. Last night, May 31, the beloved comedian-host was strapped to a chair while wired up to a lie detector. The scene was part of John's special anniversary show, "Sweetilicious," at the Music Museum in Greenhills, San Juan.

John "Sweet" Lapus received a dose of his own medicine last night, May 31, when he submitted himself to the lie-detector test, as part of his special anniversary concert Sweetilicious held at the Music Museum in Greenhills, San Juan.

Inspired by his own segment "Don't Lie to Me," which is seen every Sunday on Showbiz Central, the talented comedian-host gamely yet nervously allowed himself to be grilled by his good friend Janno Gibbs.

NO BITTERNESS. For his first question, Janno immediately dropped the bomb.

"Sumama ba ang loob mo sa dati mong istasyon dahil natengga ka noon ng almost a year?" asked Janno. He was pertaining to John's career in limbo a couple of years back with ABS-CBN. After a period of zero projects with ABS-CBN, John jumped ship and joined the defunct S-Files as one of its hosts. The move consequently pitted John head on with ABS-CBN's showbiz talk show The Buzz, of which he used to be part.

"No," John resoundingly answered to the cheers and jeers of the audience, "may apela ako, no talaga, promise."

Everyone inside the venue held their breath while the inspector figured out the result of the data transmitted to the lie-detector machine. The entire Music Museum erupted when the "lie" sign was flashed by the inspector, sending Janno to deliver a lively dance number.

Janno's second question this time dwelled on the rumor saying that John's ex-boyfriend was allegedly snatched by talent manager-host Boy Abunda. Legend has it that John tailed his lover at the time, only to find him visiting the residence of Boy.

FEUD WITH JOBERT AND CRISTY. It is no secret that John and reporter-host Jobert Sucaldito are presently tangled in a rift, which was allegedly instigated by the latter.

To which John calmly and endearingly replied: "Yes."

The result of the lie-detector test agreed with John's answer. Immediately after the inspector flashed the "truth" sign, John generously shared the details.

According to John, he had a conversation with someone from The Buzz, and they touched on the fact that Showbiz Central is doing very well in the Mega Manila rating contest as compared to ABS-CBN's showbiz talk show.

John also stressed that although he's not in good terms with veteran reporter Cristy Fermin, it doesn't mean that he hates Cristy more than Jobert. It was more "utang na loob" according to John—who worked with Cristy both as a staff and later on as a co-host during his start-up years in the industry.

John couldn't understand though why Jobert has been lashing out at him. "Di ko alam kung ba't nakiki-okray," wondered John.

As a prize for being a good sport and for tallying in a good grade, Janno presented John with a mouth-watering gift: Dingdong Dantes.