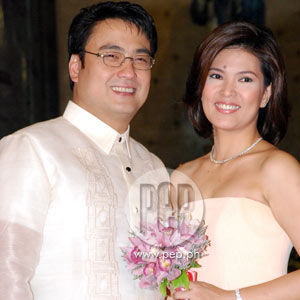 For the first time, Senator Bong Revilla finally broke his silence about the rumored rift between him and Jorge del Rosario, the father of Inah Revilla's husband Vince del Rosario.

In Showbiz Central's exclusive interview with real-life couple Bong Revilla and Lani Mercado shown yesterday, June 1, the senator did not go into the details about the alleged misunderstanding with Mr. Del Rsario, but clarified that everything had been settled even before the wedding of Inah and Vince last Wednesday, May 28, at the Manila Cathedral.

"Alam mo, bago makasal sila, maraming pagsubok na pinagdaanan," said the senator. "Muntik pang hindi matuloy yung wedding, e, because of some people who are trying to destroy me and our relationship with the other side [del Rosarios]."

Then, he went on saying, "This it the very first time for me to talk about the issue. Ang point is at least naayos and we will do this for the sake of our daughter. We love our daughter and we love Vince kahit na ano pang sabihin nila."

In the previous article published in PEP (Philippine Entertainment Portal), the root was said to be that some people around Bong were allegedly badmouthing Mr. del Rosario. This included rumors saying that Mr. del Rosario was not helping the Revilla family with the wedding preparations of his son and Inah. (Click here to read the full article)

However, Mr. del Rosario clarified in the said article that he had already talked to Sen. Bong and settled the issue.

Bong described his closeness to Vince's dad, "Jorge is a very good friend of mine, he's like a brother to me."

"HUWAG ANG ANAK KO." During the interview, Sen. Bong could not stop himself from showing his feelings towards the people who continuously write negative articles against him and his family especially during the preparation of the wedding of his first daughter.

"I LOVE MY DAUGHTER." Aside from talking about the alleged controversy, Bong also expressed t how hard it was for him to let go of her daughter.

"Kung ang tatay ang tatanungin mo, kung pupuwede ko lang bawiin 'yong anak ko, babawiin ko, e. I can't do anything, it's there already so I have to accept everything. Siyempre, we're just here to guide them, to support them," said Inah's father.

He also related to Showbiz Central how emotional he was since the day he found out that Inah is pregnant and will be marrying her 24-year-old boyfriend Vince.

But Bong simply had to accept the fact that his daughter had already left the Revilla household. Also, he saw how Inah and Vince fought for their love despite the intrigues that were thrown at them.

WEDDING ANNIVERSARY. The wedding of Inah and Vince last May 28 coincidentally fell on the 22nd wedding anniversary of Sen. Bong and Lani. The couple got married first got married in the United States on May 28, 1986.

However, the couple said that the wedding of daughter was different from the celebration of their wedding anniversary—theirs would be a private occasion.

Within the 22 years of their marriage, Bong and Lani have faced a lot of intrigues and rumors inside and outside of showbiz. Despite these, the couple kept their vows to each other and raised their six children together.

So in the interview with Showbiz Central, Lani told Bong, "Siguro sapat na ang taong ito para mapatunayan natin na hindi tayo puwedeng yanigin at paghiwalayin ng kahit ano at sino pa man. Nothing will put us under in our marriage at naniniwala ako doon. I love you."

Bong replied, "Twenty-two years of full of sacrifices but as I've said, ‘There's only one Lani Mercado. Isa lang 'yan. Perfect mother to my children, perfect wife of Bong Revilla.'"