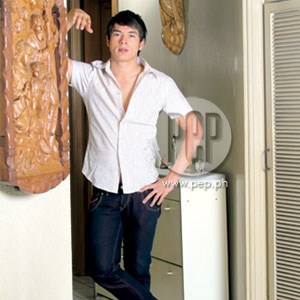 Young actor Jake Cuenca has been in showbiz for only four years, but at the rate things are going, it looks like he’ll be around for a long time.

For one, the boy has the looks and the body to make it big in this business. And the things he has learned from the series of acting workshops he attended under ace directors Joey Reyes, Carlos Siguion-Reyna, Peque Gallaga, and Gina Alajar are obviously paying off. He is showing sensitivity and depth in his portrayal of the roles given to him by his home studio, ABS-CBN.


The middle child in a brood of three, Jake is the only one in the family who has entered show business as an actor. But he is related to someone showbiz people are quite familiar with—Manoling Morato, former chair of the Movie and Television Review and Classification Board (MTRCB). Jake’s father, Juanito Cuenca, is the son of Manoling’s sister, Elvira Morato.


“Actually, I had a hard time convincing my parents to allow me to enter showbiz,” Jake recalls. “Isang taon ’yon na pinakiusapan ko sila na payagan ako. Eventually, nakita nila na this is something I really would love to do, and that I’m serious about an acting career, so nag-give-in na rin sila.”

Jake says even his Tito Manoling (tito instead of lolo is how he calls his granduncle) is supportive of his decision. “Basta he tells me lang, ‘Just be decent. Don’t make a fool out of yourself.’”


Still, whenever the family gets to hear some of the gossip, he automatically receives phone calls from Manoling and his lola.

The reference is to Roxanne Guinoo, one of the finalists in Star Circle Quest Batch One, where the Hero Angeles–Sandara Park love team started. From this same batch, the JoRox (Joross Gamboa and Roxanne Guinoo) love team was born. Joross and Roxanne ended up as real-life sweethearts, but parted ways late last year.

Given the chance, he could go on and on talking about Roxanne. He confesses that he had a big crush on her long before they were formally introduced to each other.


That’s why it makes him extra happy that the two of them are being paired by ABS-CBN in projects such as Your Song, Maalaala Mo Kaya, and Lastikman. Along with Joross, they appearing in a new sineserye, Natutulog Ba ang Diyos?, which is taking over the time slot of May Minamahal.

Jake had two serious relationships in the past. The first was when he was 13 years old, and the second came to an end two years ago. Today, he says he and Roxanne go out on dates, mostly eating out or going to Mass.

He adds, grinning: “Sana, one of these days, we can go and watch a movie together.”

Roxanne and Jake are so different in a lot of ways. “Siya, laking probinsiya. Ako, laking everywhere, kasi I was born in California, I lived in Spain for a short while, and now I’m here. And I am so independent. Siya, medyo sheltered by her family.”


But their differences are not getting in the way of their rapport. “It’s a positive pa nga, kasi ang ganda ng conversations namin. I learn a lot from her. We talk about everything—family, careers, what we want to accomplish in life. We discuss our dreams.”


The one thing he would never tell Roxanne is how to run her own career. “She has people around her who know what’s best for her.”

And the sexy White Castle Whiskey commercial where Roxanne wears a skimpy red bikini—was he okay with that?


“I’m very proud of her for doing that. I cannot tell her not to do sexy pictorials. Ako nga, you see me posing in my underwear also.”

Jake’s sexy pictorials appeared in X-Ray Magazine and on billboards and display windows of Bench, of which he is an endorser. He has also walked down the ramp at the Araneta Coliseum wearing nothing but briefs for the Bench fashion show. But all this skin exposure is not intended packaging, he says. He simply does what’s asked of him.


Giving his 110 percent in everything he does, Jake says he is willing to do whatever his home studio thinks will be good for him. He says he doesn’t mind doing sexy poses, but he will “never be naman too indecent and show everything,” he says, laughing. “No way!”


The Kapamilya network has given him offbeat roles—for instance, Gerald Anderson’s mean brother in Sana Maulit Muli—but it seems he is now also being groomed to play leading man.


His Star Magic handlers want him to be “more mahinhin with the sexy pictorials,” he says. “Kinakalma nila ako pagdating doon. They don’t want it to be too frequent.”


Which is perfectly fine with Jake, since he intends to establish himself as a versatile actor who’s in the business for the long haul.

“Gusto ko talaga to be good at what I do, and I hope I can live up to their expectations.”