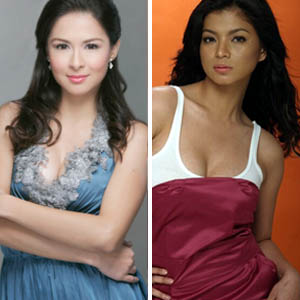 Alarmed by their idol’s irregular performance in this year’s FHM Sexiest Women contest, fans of young actress Angel Locsin (right) cast doubts on the latest results released by the the online site of FHM showing Marian Rivera (left) in the top spot.

The supposed rivalry between Angel Locsin and Marian Rivera has spilled over in this year's voting for the FHM's 100 Sexiest Women.

Recently, fans of Angel are accusing the popular men's magazine of manipulating voting results in favor of the other contenders, and in this case, GMA-7's current darling Marian.

In an e-mail letter disseminated by a certain Grace Smith, a self-confessed Angel Locsin supporter, she said that fellow fans were taken aback by the sudden slide of their idol in the ranking despite the incessant voting being carried out by Angel's ardent supporters.

"Some of my co-supporters had been angered by the sudden drop of online votes for our bet, making Ms. Marian Rivera in the No. 1 spot and Ms. Angel in No. 4. It is only but natural for us to act like that since we've been voting unceasingly," wrote Grace.

"Of course we cannot do that 24 hours a day 7 days a week since most of Angel Locsin supporters are office employees who need to attend to their jobs first and foremost, but as soon as we get home we manage to vote everyday ever since the online voting started. To add, some of our online voters have been banned disabling them to vote further, for no reason at all. In effect, they thought it was the reason why the leading female took the No. 1 spot."

While Angel's fans are not questioning the integrity of FHM, as Grace said, it was clear that the group was bringing up the issue of transparency—an integral element of any contest highly driven by digital media.

"To clear if off, our bet, Miss Angel Locsin has no knowledge or whatsoever with our activities in supporting her to win in the FHM sexiest race. This is our voluntary and heartfelt efforts to make her No.1 in magazine once again," stressed the loyal supporter.

NO MANIPULATION. FHM Digital Publisher Denis Achilles del Callar, on the other hand, scoffed at the allegation, stressing the words: "We do not manipulate results."

"Any ‘results' previously released through FHM.com.ph's newsletter specifically states ‘PARTIAL AND INCOMPLETE RESULTS.' This is due to the fact that text votes do not come into our database automatically, they have to be gathered and added to the database—as do written/faxed votes.

"Contrary to the e-mails being circulated, we've never published the number of votes either on-line, through text or through the magazine. Any claim that so and so celebrity was leading last week by several thousand votes is therefore an act of fiction with no basis on reality.

"Also, voting was stricter this year precisely to discourage stars who pay people to do nothing but vote for them all day, only ten votes per day on-line and via text per user/cellphone is possible—unless you own multiple SIMs and user-Ids."

As for the technical glitches occasionally encountered by the phone subscribers, Denis argued that the FHM team absolutely has nothing to do with it.

"We have no control over Smart, Globe, and Sun," he explained. "If their system is currently faulty, it's not our fault and there's nothing we can do about it."

FHM.com.ph has ended the voting for the 100 Sexiest Women. The results will be announced in the July 2008 issue of FHM.

Continue reading below ↓
Considered a highly-anticipated affair, the FHM annual event gathers more than a hundred gorgeous female celebrities all in one night. Ranking is based on votes placed by fans and supporters, and the top placer automatically secures the coveted crown plus the distinction of being hailed as the country's sexiest woman.
Read Next
Read More Stories About
Angel Locsin, Marian Rivera, FHM, FHM Sexiest Women
Post a Comment
Featured
Latest Stories
Trending in Summit Media Network