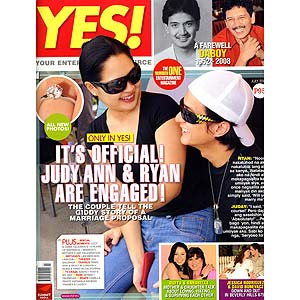 When news came out about the diamond ring that Judy Ann Santos was wearing, people speculated that it was not just a birthday gift from her boyfriend of three years, Ryan Agoncillo. In fact, some thought that it was already an engagement ring. But both Judy Ann and Ryan kept mum about it. Instead, they just kept on saying, "Nag-iipon pa." (Click here to read related article)

Juday gave YES! the privilege to announce their engagagement. "It's official, Judy Ann and Ryan are engaged!" shouts the cover of its July 2008 issue.

In her interview with YES! associate editor Anna Pingol, the young superstar hoped that her friends in media will understand her decision to talk to YES! first.

Now, PEP gives you some of the exciting parts of the engagement story that was held on the first few minutes of Judy Ann's 30th birthday last May 11, 2008 at the Antulang Beach Resort in Dumaguete City, Negros Oriental.

THE PRECIOUS DIAMOND RING. Ryan admitted that he really sought the help of Juday's best friend, Beth, and her husband, Chinese businessman Johnny Wong, in obtaining the controversial diamond ring for Judy Ann.

When she knew about it, Beth said that she got upset because they were keeping it a secret from her. "Kasi, feeling ko, asawa naman kita, di sana niligwak mo na sa akin. E, ang bilin kasi ni Rye, kahit sa akin, 'wag sasabihin."

Later on, Ryan realized that he also needed the help of Beth—assess the quality of the diamond he had chosen and know the exact size of Judy Ann's right ring finger.

Ryan called Beth to make sure that the ring he wanted was a good buy. After he gave the specs, Beth referred to a G.I.A. (Gemological Institute of America) paper that was included in one of her rings.

When all the needed information was gathered, Ryan purchased the ring in Hong Kong with the help of Johnny's Hong Kong-based cousin, Cindy Kung. When it arrived in Manila, Beth kept the ring until the day Ryan proposed to Juday.

THE SECRET PLAN. Ryan kept everything about his plans for the proposal to himself. Even their close friends had no idea how he was going to propose to his girlfriend.

After a few days, Judy Ann was set to celebrate her birthday during a three-day vacation at the Antalung Beach Resort, which was actually a surprise birthday gift from her best friend Beth.

In the early evening of May 10, everybody started to party in time for welcoming the first hour of Juday's May 11 birthday. They had no idea about how Ryan would propose that night.

THE MOST-AWAITED MOMENT. When the right moment came, Ryan went down on his knees before Judy Ann, uttering these exact words: "Will you marry me?"

During this moment, Beth said, everyone was blinded with tears. "Lahat kami, umiiyak kami nang sabay-sabay."

THE WEDDING PLANS. Now that Ryan has asked the most-awaited question in his relationship with Juday, their followers are now asking: When is the wedding?

The only thing that is definite about the wedding is that it's going to be a simple celebration.

Ryan has just returned from a vacation in Europe with Judy Ann and some of their friends who were also with them in Antulang. Judy Ann, who chose to stay there, says that it is not their honeymoon yet, rather it is a gift for herself.

The July 2008 issue of YES! has the full details of Juday and Ryan's engagement from beginning to end. YES! is now available at all leading bookstores and magazine stands.