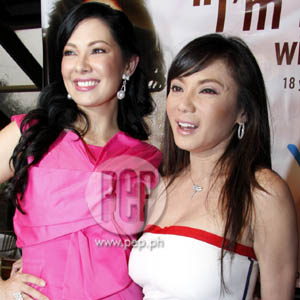 Actress-TV host Ruffa Gutierrez is now a certified Belo endorser. “Even when I was in Turkey, I would go to Belo every time I would come home. But when I decided to return to Manila for good, my mom signed me up with another cosmetic surgery clinic. So when the chance came up, I welcomed the opportunity to go back to Belo,” she narrated.

Yesterday, June 18, Ruffa was formally introduced as the new endorser of the Belo Medical Group Inc. The event formalized her separation from the Calayan Surgicenter, which she used to represent together with her feisty mother Annabelle Rama. Ruffa Gutierrez insists there's no bad blood between her and popular cosmetic surgeon Dr. Manny Calayan.

It's natural to be intrigued by Ruffa's change of alliance, considering that Belo and Calayan are known rivals in the field of beauty and cosmetic surgery. Both companies have also gained a reputation for tapping celebrity endorsers to attract clients.

Ruffa explained her decision to join the Belo team in a press conference prepared especially for her by Dr. Vicki Belo at Annabel's restaurant on Tomas Morato, Quezon City.

"Even before pa naman, I was already a Belo patient. But I was still living in Turkey then, so talagang wala naman talagang offer nun si Doktora Belo for me to be part of the Belo Medical Group because I wasn't really living here. Wala pa po akong career nun, asawa pa lang ako at nanay nun.

"So it just so happened that my mom closed a deal with Dr. Calayan and I stayed with them for four years. When my contract expired March 30th, naisip ko bumalik na ako sa dati kong bahay, kasi nagsimula naman po talaga ko kay Dra. Belo."

NO PROBLEM. Ruffa said that her parting of ways with Dr. Calayan was amicable.

Ruffa further added, "Also, one more thing, in fairness to Dr. Calayan during the time that I was there, he treated me also very well wala po kaming problema. Hindi kami magkagalit, wala kaming bad blood. Maliit lang naman ang industriyang ito. It's just that as a person, I think I've grown and it's time for me to move on."

In the face of doubts expressed by some people, Ruffa stressed that money was of little importance in her decision to transfer. When it comes to endorsements, she pointed out that she follows her heart more than minding how to further fatten her bank account.

"Siyempre si Mommy excited sa kanyang komisyon," smiled Ruffa, referring to her mother-and-manager who was present during the press conference just to give her daughter "moral support."

Ruffa added, "The others naman, they also offer very high. So it's just a matter of choosing; hindi ‘yong sinong highest bidder kasi matataas din naman ang offer nila. Kung sino talaga ako kampante and comfortable with, and for me, I love Dra. Belo so that's the reason why I'm here."

LOVE CAN WAIT. Ever since her controversial breakup with estranged husband Yilmaz Bektaz, Ruffa made it clear that she is in no hurry to fall in love again.

Although the marriage failed to live up to its fairy-tale beginning, Ruffa doesn't have any regrets.

"It's better to have loved and lost than to have never loved at all," she quipped before adding, "kasi meron akong dalawang magagandang anak. But like I have moved on [and] now I'm with Dra. Belo, I think it's also time for my heart to move on."

The insistent question: What's the real state of her love life?