Regine Velasquez and Ogie Alcasid come out publicly as lovers 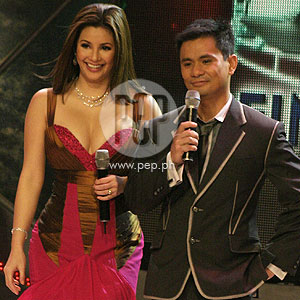 For the longest time, people speculated that something was going on between Ogie Alcasid and Regine Velasquez, but the couple managed to keep mum until he announced it last year.

Rumors about Ogie and Regine being an item started to get loud in showbiz several months before Ogie Alcasid revealed it in YES! magazine last June 2007.

In fact, during the press conference for the Regine and Robin Padilla movie Till I Met You in the last quarter of 2006, she told the entertainment press, "May boyfriend ako of four years." A non-showbiz guy, according to her.

But the press people, as usual, didn't buy that. They still strongly believed that Asia's Songbird was concealing her rumored boyfriend.

February of the following year, Ogie gave a small hint to the public when he announced that he would have a big revelation in June 2007. No one had an exact idea about it. He just said that it was going to be "big and personal." (Click here to read full article)

The public and the entertainment press waited patiently, but most already sensed that the revelation would be about his relationship with Regine. After all, the rumors had been rife for the last four years, after Ogie's wife, Michelle Van Eimeren, 1994 Miss Australia, went back to Australia.

THE "BIG AND PERSONAL." For four months, showbiz reporters continuously asked Ogie about his special revelation, but instead of giving it away, he chose to keep quiet. When Regine was asked about it, her answer was, "Let's just wait for Ogie's announcement in June."

In the last quarter of May, even before the supposed schedule of the singer-songwriter's confession, YES!'s June 2007 issue already hit the newsstands and bookstores with its headline: "Ogie's June Announcement on Regine: ‘I love her, I'm crazy about her.'"

In the YES! article, Ogie first talked about the situation with his wife Michelle, starting with, "I'm separated. Michelle and I are separated, and we have been...for a long time."

Ogie did not go into details but he made the assurance that he and Michelle remained friends—best friends, in fact. He added that although his wife and kids, Leila and Sarah, were now based in Australia, he never forgot his responsibilities towards them.

After talking about his family, his in-laws, and the rumored annulment being filed, Ogie continued with the next agenda of his revelation: Regine Velasquez.

Further underscoring his feelings, Ogie said, "As for me, I'm in love with her, I'm crazy about her, and she knows that."

The singer-songwriter went on to narrate how he told Regine his feelings for her, how they managed to have time for each other in spite of their busy schedules, and other sweet and fun experiences they had as a couple who had not yet come out in public.

"I LOVE HIM VERY MUCH." During the interview with YES! magazine, Ogie Alcasid was asked if he had any idea about Regine's feelings for him. At first, he answered, "I can't say that." And then he blurted out in jest, "Diyos ko, obvious naman siya, e!"

Ogie couldn't find the right word to describe how Regine was towards him. He said, "With regard to her position towards me... well, you might want to ask her. I don't know. I mean, it's kind of mysterious how we are."

Not long after the June 2007 issue came out, Regine came out with an answer to YES! magazine's question to Ogie. (Click here to read full article)

Regine affirmed Ogie's statements with, "I love him very much," during the press conference for the Pinoy Pop Superstar Grand Finals last year.

She even thanked the media for understanding her when she and Ogie chose to hide their relationship. She said, "First of all, nagpapasalamat ako sa lahat ng mga kaibigan ko sa press at sa mga taong naging mabait sa akin. Nagpapasalamat ako sa inyo at hindi ninyo ako hinusgahan."

Tears started to fall as she continued, "I'm both happy and scared right now. Happy ako, although hindi halata, dahil at least now it's out. But at the same time, very scared on what people will say about me. I'm scared I will be judged again."

FUTURE PLANS. The public openly accepted the relationship of Ogie and Regine after their announcement. In return, they were both honest in giving details about their relationship.

The couple's fans are now just waiting for the next big announcement, their wedding plans.

The couple said that they would get there someday; they just have to fix some legal matters.

But to give an idea of what their wedding would look like, Regine narrated to the media one conversation she had with Ogie. (Click here to read related article)